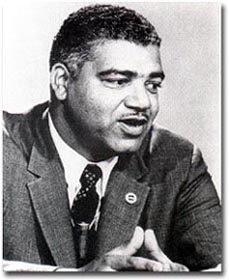 Whitney Moore Young, Jr. was born in Lincoln Ridge, Kentucky, on July 31, 1921, into rather unusual circumstances. His family was black and lived in the South, but they were constituents of a black educated elite, as his father was the president of Lincoln Institute, the black boarding school that Young eventually would attend. His mother, the former Laura Ray, was a teacher at that school. Thus, as children, the Youngs never doubted that they could be educated and successful members of society.

After graduating from the Institute as valedictorian, Young continued on to Kentucky State Industrial College, a historically black institution, with the hope of becoming a doctor. His aspirations changed, however, after he had taken a year of premedical courses. He taught at a nearby school for a year, and then decided to join the Army. In 1944, after studying engineering for two years at MIT, he found himself in Europe in an all-black regiment with a white captain. More often than not, Young acted as a mediator between that captain and the troops, defusing the imminent racial tension. Here Young’s legendary skill as a “powerbroker” between whites and blacks was cultivated. The experience in the Army influenced him enough to lead him in to social work. On the topic, he commented to Joseph Wershba of the New York Post, “It was my Army experience that decided me on getting into the race relations field after the war. Not just because I saw the problems, but because I saw the potentials, too. I grew up with a basic belief in the inherent decency of human beings.”

Young with his wife and daughters.

Young was known as an articulate and refined man, and this reputation allowed him to move relatively freely between various social circles. In Minnesota, he was acquainted with future vice-president Hubert Humphrey, who was mayor of Minneapolis from 1945-1948.

Upon accepting a position as executive secretary of the Omaha, Nebraska Urban League, Young was offered teaching positions at the University of Nebraska (1950-1954) and Creighton University (1951-1952).

Until 1954 Young had been fighting for the civil rights of blacks, but there was still a sense of incompletion in his work. The opportunity to become directly involved on the civil rights battlegrounds of the South arrived when he became dean of the Atlanta University School of Social Work.

At this point, Young also became a member of the Atlanta Unitarian Church, and thus forced it to face racism directly. The summer after he joined the church had planned its annual picnic, and it would take place in a park that did not accommodate blacks. Young was surprised, that the white church members had never thought about the possible offense in utilizing such a venue, and he protested. The church agreed that beginning with the next picnic, a different place would be used. Despite this bittersweet victory, Young would remain a Unitarian, joining the White Plains Church Community Church in New York. 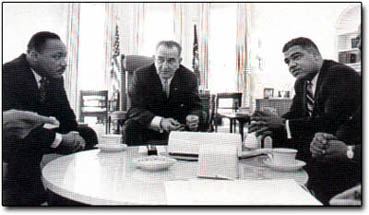 The School of Social Work had a storied past as an innovative and proactive institution in the 1930s and 40s, but its reputation had taken a downturn in the 50s. The challenge was an attractive one for Young, and he met it by enlarging the faculty and the budget, creating additional training programs, and reshuffling the leadership.

Young also decided to take a more direct hand in civil rights activities in Atlanta by co-chairing the Atlanta Council on Human Relations, and he was instrumental in desegregating the public library system.

Ironically, the effects of discrimination eventually convinced Young to leave the South. In 1960 he received a Rockefeller grant to study for a year at Harvard University, and in 1961 a golden opportunity presented itself. He was offered and accepted a job as president of the National Urban League, succeeding Lester B. Granger. As the president he revolutionized the inner workings of the League, using his connections to tap funding sources like the Rockefeller family. Under his presidency, the budget was increased tenfold, the staff was quadrupled, and the number of regional offices increased from 63 to 98. His “Operation Rescue” had in fact revitalized the Urban League. 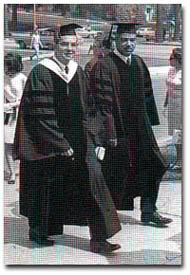 Not all, however, viewed Young as a legitimate voice of black concerns. Among a portion of the black community, he was considered to be an instrument of the general white population in that he appeared to be too passive and accepting of society.

In effect, he was constantly navigating a fine line to be accepted by whites and blacks. He would speak about the problems of ghetto life, and then lobby for support from executives of IBM and RCA. This aspect of his career culminated in 1963, when the League was asked to support the March on Washington. The League’s board members shied away from endorsing the demonstration because they perceived it as radical, but Young convinced them that the League’s influence would actually serve to neutralize the radical elements. The Urban League emerged successfully at the frontier of the civil rights movement.

The gross inequalities that Young dedicated himself to fighting were apparent but largely ignored. In a New York Times Magazine article, he articulated the discrepancy in earnings between the races. The average white family earned more than twice as much as the average black family. He observed, “For more than 300 years the white American has received special consideration or ‘preferential treatment’ … over the Negro. What we ask now is that for a brief period there be a deliberate and massive effort to include the Negro citizen in the mainstream of American life.” Urged on by his Unitarian faith, he was determined to make a difference.

The Urban League entered a rough period under the Nixon administration and was forced to implement government funding to stay afloat. Young continued to lead with creativity, even adjusting his rhetoric to be more in line with the Black Power movement in the late 60’s without alienating whites.

Young authored two books: To Be Equal and Beyond Racism: Building an Open Society. 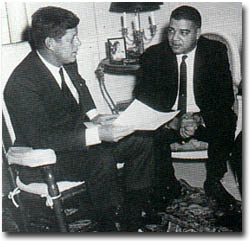 In 1968 the Starr King School for the Ministry in Berkeley, CA, honored him with an L.H.D. degree.

Whitney M. Young, Jr. suffered a heart attack while swimming on March 11, 1971, and died in Lagos, Nigeria, while attending a conference for black leaders.

Young was married to Margaret Buckner in 1944, and they had two daughters.

Lexington: The University Press of Kentucky, 1998.