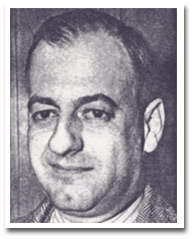 Former Assistant Attorney General and head of the Justice Department’s Antitrust division, Wendell Berge died in Washington of a heart ailment on September 25. He was chairman of the board of trustees of the All Souls’ Unitarian Church, Washington. At the May Meetings of the American Unitarian Association this year, Mr. Berge addressed the Laymen’s League on the subject: “Competition and Business Ethics.”

The Washington Post in an editorial, said: “The death of Wendell Berge takes from Washington one of its most public-spirited lawyers and a man who made a notable record in antitrust enforcement. As a private citizen, Mr. Berge took an active part in many community activities and especially in the work of the All Souls’ Unitarian Church, where he was chairman of the board of trustees.”

Mr. Berge was a native of Lincoln. Nebraska, from an active Democratic family (his father, who had Populist “leanings,” was narrowly defeated while running for governor in 1904). He took his undergraduate diploma at the University of Nebraska and his Bachelor of Law from the University of Michigan.

After a brief period of practice in New York City, he went to Washington in 1930 at the invitation of John Lord O’Brian, prominent antitrust lawyer, then head of that division under Herbert Hoover. In 1941, President Roosevelt named Berge Assistant Attorney General, in charge of the criminal division of the Justice Department. In 1947 he returned to private practice in Washington.

Mr. Berge consistently argued that monopoly would ruin free enterprise. and that competition must be preserved. He wrote Cartels: Challenge to a Free World and Economic Freedom for the West.

— From the Christian Register, November 1955.

A crucial challenge to free enterprise and to our democratic institutions confronts us.

At the very beginning of its history the United States sought to resolve the most difficult of all political problems in human society—the establishment of an enduring political democracy. The basic principles upon which the political structure of American life is founded may not be perfect in the ideal sense. But, within the conditions and limitations of human existence, American political democracy has not only withstood the test of time; it still represents the freest and most progressive system of government by which men have sought to make justice the aim of law, and law the instrument of liberty.

Americans in this century have witnessed more than one attempt to challenge these political premises. Dictatorship and absolutism have repeatedly sought to overthrow governments resting on the common consent of the governed, and to substitute the force of irresponsible power for the law. Perhaps the greatest tribute that can be paid to political democracy is that it has withstood the assaults of aggressors, and in doing so has made it possible for the American people as well as millions throughout the world to hope that the future will still have regard for the dignity of man and that an enduring peace may be attained.

Both democracy and peace, however, must have a firm economic basis. Moreover, economic development must keep pace with the needs of democracy in an era of rapid social and technical transition. It is at this point that there is an increasing concern that tendencies have arisen in the economic development of American society, which, if they become dominant, will imperil the health of democracy. The depression of the thirties, which had worldwide consequences for democracy, crystallized the danger of some of these tendencies.

We have come to understand that unless political democracy so nourished and supported by a prosperous economic democracy in which opportunity for individual enterprise is constantly renewed, the whole structure of a free society is threatened. In other words, continuous or repeated economic crisis is a challenge to freedom no less deadly in the long run than was the mailed fist of dictatorship. It is for this reason that monopoly in the nation’s industry is a menace with which American society must cope or find one day that its democratic institutions no longer prevail.

During the years in which the American economy was growing up, discovering its resources, building railroads, constructing towns and factories and setting an unprecedented record of economic accomplishments, it seemed that monopoly had disappeared along with the divine rights of kings and feudalism. It gradually became apparent, however, that the concentration of economic power, like the concentration of political power, may be temporarily submerged only to reappear in magnified and more potent forms. Many states enacted or resurrected the common law principle of making monopoly illegal. On the national level, these efforts eventually culminated in the passage of the Sherman Act in 1890.

Since that time the American people have been engaged in an unceasing struggle with monopoly. If the American economy is to realize its potential growth, to maintain its position as a great and prosperous democracy in a developing world economy, the process of monopolization must be halted.

The concentration of economic power in the hands of monopoly is today higher than ever before in our history.

The two hundred and fifty largest corporations in this country now hold roughly two-thirds of the nation usable manufacturing facilities. These same two hundred and fifty corporations either own or are in a position to control facilities equal to those of all our manufacturing corporations in 1939. Sixty-three of the largest manufacturing corporations have sufficient liquid assets to purchase all of the usable government-owned facilities, or to purchase the assets of seventy-one thousand small corporations. That such a development is already underway is apparent in the sharp rise in the number of mergers and acquisitions. In the last quarter of 1945 there were more mergers and acquisitions in manufacturing than at any time in the previous fifteen years. This consolidation movement spells further reduction in the number of independent concerns and increasing concentration of control in major manufacturing industries. Monopoly groups in our economy today thus control a higher ration of raw materials, of plant facilities, of technological know-how and research, and of financial power than at any time before World War II.

What must be done?

In light of these facts it is necessary to ask how we may best reestablish the condition upon which a system of free enterprise depends—the conditions that must be met if we are to have an expanding rather than a contracting economy. Just as our representative form of government depends on a system of checks and balances to maintain political freedom, so it depends upon the conditions of free enterprise and competition to maintain opportunity, to raise the standard of living of our citizens, and to provide an expanding economic life for the nation. In effect, this means that industrialists and businessmen generally have not only an economic stake but a social duty to refrain from monopolistic practices, and to adhere to the principles of a free market.

We are now engaged in an immense drama of invention and discovery—a second industrial revolution which in time will affect every economic activity of mankind. Those who really believe in free enterprise are convinced that to meet the test of change most effectively industry must be competitive. It must display a venturesome spirit in promoting peacetime economic activity and in translating the gifts of science into new types of production, new goods and services, and new occupations. It is at this point that the threat of monopoly is most potent. How can independent inventors and businessmen create new enterprise if it is in the power of cartels or combines to deny access to large areas of technology? How can new firms enter a market if it is in the jurisdiction of a monopoly group to stifle competition? As long as monopoly is able illegally to rule over entire industries, new ideas, new investment and new products cannot enter the market. Our economy can be neither free nor expanding if cartels are able to fence in the vast new frontier of science.

It is characteristic of Americans always to feel that the future beckons. They recognize that the future may hold risks and that new economic problems will demand new answers, but they are ready to apply their wits and strenuous labors to finding the answers if always they can breathe the air of freedom. The way of Monopoly, however, leads backward. It is not the way of democracy.

— Abridged from the Christian Register, November 1946.

“Why I Believe in Unitarianism”
by Wendell Berge

Unitarianism offers the opportunity for a positive and buoyant faith in the possibilities of man to create a richer, fuller life for himself and his fellows, for this and succeeding generations. It offers a challenge to assure an immortality here on earth for man and his world. The opportunity is for man, and the challenge is to him. Thus religion for the Unitarian is a dynamic force that elevates life to a place of greater dignity. Because it does not require rejection of any demonstrable acts, and indeed invites inquiry and adventure, the Unitarian way of life prevents inner conflicts between religion and the known facts of life.

It seems to me that the spirit of freedom in which Unitarians approach their religion is needed if religion is to survive as any kind of force in the affairs of men. Given such freedom, the church could perform a vital role in leading men’s thinking to the ways of peace and well-ordered human relationships. Traditional Christianity certainly has failed to provide the moral leadership men need—to which failure the war and the present confusion are tragic witnesses but there may yet be time to save ourselves if we can sweep aside the trappings that have encumbered men’s minds and spirits, and fare boldly the challenge of the present crisis. The advance of Unitarianism offers hope to those who believe in man’s infinite possibilities.