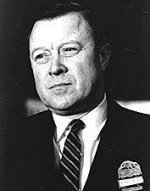 Born of immigrant German parents in Wheeling, West Virginia in 1907, Walter and his brothers, Victor and Roy, grew up in a worker’s family which was impelled by the vision of a coming democratic social commonwealth. Trade unions and social democracy were a family commitment.

When Walter left high school at age 16 to work as an apprentice die maker, he began eaming 11 cents an hour. After three years, he moved to Detroit, where America’s most important new industry was automobiles. The great organizations, led by Ford and General Motors, regarded unions as anathema. Walter got a job with a supplier of bodies to Ford which was known as “the butcher shop” or “slaughterhouse” because accidents were so common. Soon he was hired by Ford itself for five years, right through the depression. When he was not busy at work, he completed high school and did college work. In 1932 he campaigned for Norman Thomas, the Protestant minister who was the Socialist Party candidate for president of the United States. Walter lost his job with Ford during the campaign.

With money he and his brother Victor had saved, they decided to tour Germany, France, and England, as well as the Soviet Union, where they found jobs in a Gorki auto plant. Both were impressed by the comradeship and cooperation in the Soviet factory, but they were distressed by many other aspects of Soviet life. Retuming to the United States in 1935, they were surprised and delighted that the Roosevelt administration was encouraging workers to join unions. Nevertheless, neither of them could find a job in Detroit. They suspected they were blacklisted. Walter then and there decided to become a unionist. He began full time work organizing members of the newly formed United Auto Workers. Soon he was president of Detroit local Union 174. He successfully organized West Side auto workers in a sit-down strike which they won. Still more important was the UAW victory at Flint, where Roy and Victor Reuther were strike leaders at the plant which manufactured all Chevrolet engines. The UAW grew rapidly to 300,000 members in 1937, but strife within the union was common and almost destroyed it.

After a UAW-CIO convention, Walter accepted the post of director of the General Motors Department. A strike began in Detroit in 1939. Although General Motors fought fiercely, it finally accepted the UAW as the exclusive bargaining agent for tool and die makers in 42 plants. In 1941 the UAW won a victory over the last and most determined foe of auto unionism, Henry Ford. The American concentration of power in the hands of management finally was countered by organized labor’s strength.

Walter Reuther was America’s foremost leader of independent, democratic union power. He negotiated wage and hour improvements as well as unemployment, early retirement, health and welfare benefits. The son of a trade union father became an exemplar of reliable union power dedicated to the commonwealth. In addition, he contributed mightily to mobilizing public opinion on behalf of civil rights.

Walter’s life was no mere garden of flowers. In 1948, when at home in his kitchen after a union meeting, he was almost assassinated by a twelve-gauge shotgun loaded with buckshot. Only a quick turn by him saved his life, but his right arm was shattered and nearly severed. In 1970, Walter and May Reuther were traveling on union business in a chartered jet. Landing in the rain, it brushed the top of a tree and burst into flames, killing all aboard. During the memorial service, there was a three minute silence when everyone, plus all drill presses and lathes, were motionless.