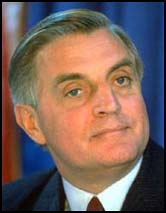 A member of the Democratic Party, Mondale worked as a lawyer in Minneapolis and as attorney general of Minnesota before being elected to the United States Senate in 1964 to fill the vacancy caused by the resignation of Hubert Humphrey. In the Senate he supported open housing, racial integration of schools, migrant worker protection and tax reform. He was also an opponent of the Vietnam War. Mondale also served as chairman of the Select Committee on Equal Education Opportunity.

In 1976 Jimmy Carter selected Mondale as his running mate and after the defeat of Gerald Ford became vice president. In this role, he supported legislation on trade union reform, an increase in the minimum wage, and tighter control on U.S. intelligence operations. Carter and Mondale were defeated by the Republican Party candidate, Ronald Reagan, in 1980. Four years later, Mondale was the Democratic Party presidential candidate. He campaigned in favor of a nuclear freeze, a reduction in the federal budget deficit, and the Equal Rights Amendment (ERA) but was easily defeated by Reagan.

After the election Mondale became a partner in the Dorsey & Whitney law firm in Minnesota and was chairman of the National Democratic Institute for International Affairs (1986-1993) an organization that conducts international programs to help maintain and strengthen democratic institutions. Mondale’s work was especially successful in Poland and Hungary. In 1993 Mondale was appointed as ambassador to Japan. After retiring from the post in December 1997, Mondale rejoined the law firm of Dorsey & Whitney.

Inside the Mayo Clinic: A Memoir by John T. Shepherd & Walter Mondale (2004).