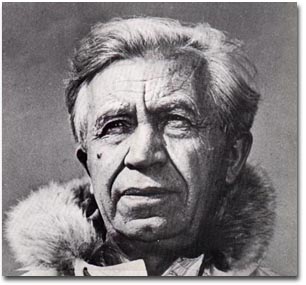 Vilhjalmur Stefansson was born on November 3, 1879, in Ames, Manitoba to Johann Stefansson and Ingibjorg Johannesdottir, who were both Icelandic immigrants in America. Christened William, he would eventually change his name to its Icelandic variation. The Stefanssons lived in a tiny log cabin about a hundred miles north of Manitoba in an area known as New Iceland because of its immigrant population. The family moved to North Dakota in 1881 following an 1880 flood in Manitoba. From the beginning, Stefansson was a rugged character who felt at home in the wild. Although he went largely without a formal primary education, he often practiced reading the Bible and local publications. His father died while he was but a youth, and he decided to ease the hardships of his mother by moving in with his sister, and creating a meager income by helping his brother herd cattle and sell horses. 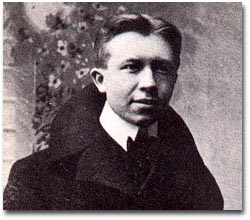 As a freshman at North Dakota.

Before leaving North Dakota, Stefansson had met William Wallace Fenn and Samuel Eliot, both of whom had seen potential in the young man to become a Unitarian minister. They offered to fund his studies at Harvard Divinity School.

Stefansson’s passion, however, lay beyond the realm of conventional studies. After aborting his theological studies upon the completion of one year, he entered the world of anthropology. In 1906, Stefansson left the divinity school to join the Anglo-American Polar Expedition, and traveled to the Arctic. Ever the adventurer, he neglected to make contact with his colleagues and spent the winter months among the native Inuit of Tuktoyyaktut, learning from the people how to hunt and fish.

The most difficult part of being an expeditionary was funding the voyages. In 1907 Stefansson traveled to New York to persuade representatives of the American Museum of Natural History to grant him the necessary finances for a second expedition. With some help from the Canadian government, he was able to depart in May of 1908.

The second expedition included Rudolph Anderson, a classmate of Stefansson’s from the University of Iowa. This journey took the men to northern Alaska, where Stefansson continued his study of the natives. For the next two years he explored the area on his way to Victoria Island to study an isolated group of Inuit who still used primitive tools and had strong Caucasian features, and whom some believed were descended from Vikings. Surviving this trip was far from easy. He notes that just after the outset, “the group was short of three things: ammunition, which we all knew was a necessity, and tea and tobacco, which the Eskimos believed were necessities. When we reached the mouth of the Horton on our way back to camp, we divided our party in two… Our troubles began. It took us thirteen days to get to camp. We were delayed by blizzards, and found the hunting poor along the way. There was not enough food for the six of us. We ate what we could, including the tongue of a beached bowhead whale. Four years dead, the carcass would have been hidden in the snow except that foxes had been digging into it… The pieces we ate were more like rubber than flesh.” 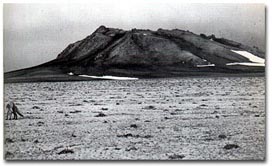 The study of this group transformed Stefansson’s livelihood into more of an academic pursuit as he published his findings from this unique group of Inuit in Scientific American and the Literary Digest. The culmination of this study was the book My Life With the Eskimo.

Stefansson then narrowed the range of his studies to the Arctic Ocean, even living on floating ice with two colleagues for several months. 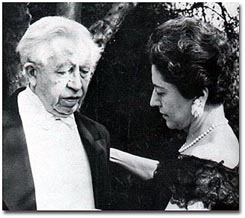 Getting ready to dine at the White House with the King and Queen of Denmark.

They subsisted on polar bear and seal. Stefansson believed that another expedition was in order in 1920 and attempted to convince the British government to fund it, but it refused. This setback caused him to abandon expeditions and to concentrate entirely on lecturing and writing.

Stefansson essentially wanted to emphasize the fact that the arctic was not the desolate, windswept land that it was largely believed to be. The two books that he wrote to this effect were The Story of Five Years in Polar Regions and The Northward Course of Empire.

Beginning in 1932 Stefansson began mapping flight plans for the nascent Pan American Airlines, and in 1933 he actually had the opportunity to work on Charles Lindbergh’s plan for a transatlantic flight. This occupation precipitated a 1940 request by the War Department that he educate the head of the Alaska Defense Force as to the conditions of the Arctic. For the next two years, Stefansson aided in the development of Alaska and northwestern Canada, particularly in oil prospects and the mapping of the Alaska Highway. 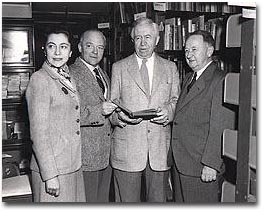 Stefansson, second from right, shows one of the books in his 25,000-volume library which was purchased by Dartmouth College. With him at the library are Mrs. Stefansson, Librarian Richard Morin, and Albert Bradley, whose gift to Dartmouth paid for the purchase. Courtesy of the Boston Public Library Print Department.

Despite the many successes, controversy surrounded the explorer’s reputation. His attempt to raise reindeer on Baffin Island failed, and his effort to create a colony on Wrangel Island in 1923 ended with several deaths. Furthermore, Stefansson’s conflicts over leadership positions with other explorers are well-documented.

Stefansson’s accomplishments are widely recognized. He was the last explorer to discover new lands in the Arctic, and above all, he recognized the unique beauty of a culture other than his own and introduced society to the reality of the Arctic sans the myths and rumors.

On April 10, 1941 Stefansson married Evelyn Schwartz Baird. He subsequently moved from New York to Vermont, and then to Hanover, NH, where he and his wife were active in the Unitarian Fellowship and “Stef” pursued his research, writing, and public speaking at Dartmouth College.