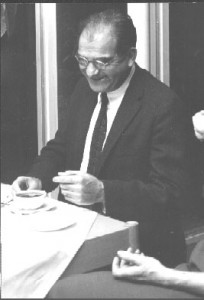 Victor Weisskopf was born in Vienna on September 19, 1908. He studied at the University of Vienna and received a doctorate in physics from the University of Gottingen in Germany in 1931. In the 1920s and 1930s, Dr. Weisskopf served at several European research institutions at a time regarded as seminal in the development of nuclear physics. In 1937 he went to the United States, where he was to spend much of the rest of his working life, becoming naturalized in 1943. The following year he was invited to join the Manhattan Project which was working to produce the atomic bomb at Los Alamos, New Mexico.

In 1945, Weisskopf was among the founders of the Federation of Atomic Sciences (now known as the Federation of American Scientists), formed to promote the peaceful use of atomic energy. In 1946 he joined the staff of MIT. In parallel to his work at MIT, Weisskopf was chairman of the high-energy physics advisory panel of the Atomic Energy Commission in the United States from 1967 to 1975.

Knowledge and Wonder: The Natural World as Man Knows It by Victor F. Weisskopf