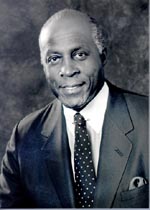 Vernon Jordan, Jr., is one of the major civil rights figures in American history. A larger than life American leader most recently labeled by the national media as “mister inside” and former President Clinton’s “first friend,” Vernon Jordan’s life and career has followed a remarkable trajectory. Growing up in the first federally funded housing project in the U.S., Jordan worked his way through college at DePauw University in Indiana. Becoming a noted speaker, Jordan won a top state award and placed third nationally for a speech entitled “The Negro in America.” After earning a J.D. from Howard University, Jordan became involved in the civil rights movement.

Over the course of the 1960s, Jordan emerged as an important leader of the moderate wing of the movement, advocating progress through the system. Jordan’s instrumental role in integrating American businesses and providing economic and social support to the expanding black middle class reached an early pinnacle when he became president of the National Urban League in 1972. Jordan became a pillar of America’s legal, corporate, and political worlds, fostering ties with the civil rights movement.

—Abridged from the University of Louisville, Kentucky’s Author Forum