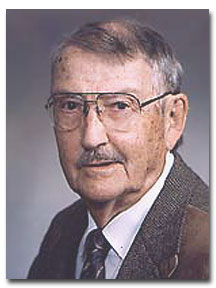 In 1970 Van Potter coined the word “bioethics” and defined this comprehensive field of thought and action. The contributon of the remarkable life work of this member of the Unitarian Society of Madison, Wisconsin to the environment of humankind is described by colleagues of the McArdle Labratory for Cancer Research at the University of Wisconsin, Madison.

The Obituary of Van Rensselaer Potter

Van Rensselaer Potter II, age 90, died peacefully Thursday, Sept. 6, 2001, surrounded by his family at the U.W. Hospital, after a brief illness. Dr. Potter was a biochemist and original bioethicist who devoted his entire scientific career to cancer research, as a professor of Oncology at the McArdle Laboratory for Cancer Research at the University of Wisconsin in Madison.

Dr. Potter was born on August 27, 1911 on the farm his paternal grandparents had homesteaded in northeastern South Dakota on the edge of the Coteau des Prairie in 1882. His grandfather died of cancer at the age of 51, the year before Dr. Potter was born, and he was given his grandfather’s name, Van Rensselaer Potter. His mother, Eva Herpel Potter, was killed in an automobile accident when he was seven, and he became very close to his father. The relationship continued after his father, Arthur Howard Potter, married Anna Sivertson and daughters Jean and Ruth Ann were born. Dr. Potter maintained close and affectionate relationships with his sisters, even though they and their families were far away in Tacoma, Washington.

Dr. Potter graduated from the Pierpont High School in 1928 in a class of 12. In the fall he entered South Dakota State College, with a total of eight hundred dollars contributed by his two grandmothers. From his sophomore year on he earned all his expenses and received special recognition from his professors and his employer, the Head of Experiment Station Chemistry, Dr. Kurt Walter Franke. Although beginning by washing rat cages and making up rat diets, he was soon feeding and weighing the animals and dissecting them when they died after consuming grain later shown to contain trace amounts of the element selenium. He was allowed to design and carry out experiments lasting several months, and to co-author several papers in the Journal of Nutrition on work done as an undergraduate. 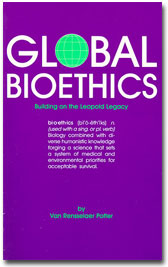 Potter’s Global Bioethics (Michigan State University Press, 1988). The cover offers a definition of bioethics as “Biology combined with diverse humanistic knowlege forging a science that sets a system of medical and environmental priorities for acceptable survival.”

He received his B.S. degree with High Honors in 1933, majoring in chemistry and biology. He continued in the Franke laboratory, taking some courses at the graduate level while seeking a fellowship to work on a Ph.D. During this period he met and courted Vivian Christensen, who was an undergraduate at that time. In February 1935, the big break came with a Wisconsin Alumni Research Foundation (WARF) Fellowship in the Department of Biochemistry, at the University of Wisconsin in Madison, with Professor Conrad Elvehjem. With the award of a full-time teaching assistantship for 1935, Dr. Potter was able to marry Miss Christensen on August 3rd of the same year.

He receiveda Ph.D. in Biochemistry with a minor in Medical Physiology in 1938, he was able to secure a National Research Council Post-Doctoral Fellowship. Sailing on the Queen Mary in August, Dr. and Mrs. Potter traveled to Stockholm, Sweden to work with Professor Hans von Euler in the Biokemiska Institutet. A second year of work was arranged with Professor Hans Krebs in England. World War II erupted the day after they arrived in England, and they were ordered back to the United States. Finding a haven at the University of Chicago with Professor Thorfin Hogness, Dr. Potter made contact with Professor Elvehjem in Madison and interviewed for a position in the McArdle Laboratory as the only other staff member, along with Dr. Harold Rusch. Taking residence in February 1940, Dr. Potter advanced to Full Professor in 1947.

While developing methods for determining the quantity of a variety of enzymes in transplantable rat liver tumors derived from some forty different primary tumors produced by certain chemicals added to the rat diet, he was able to show that no two of them were alike. While resembling immature or fetal normal liver in some respects, the tumors were unable to mature to the normal adult pattern in all details. This idea of an arrested differentiation was captured in the phrase “Oncogeny is blocked Ontogeny”.

In examining a multiplicity of differences between the experimental tumors and the corresponding normal tissues, he was led to express the goal as the separation of significant alterations from irrelevant changes in terms of the Minimal Deviation Hypothesis. As it became apparent that cancer develops as a multi-step process, driven by a combination of gene mutations, it became clear that the production of several essential gene changes could not avoid producing a variety of irrelevant gene mutations. 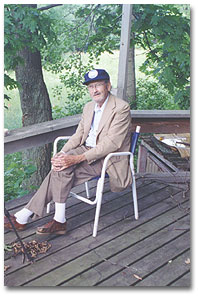 Van at the “Stuga”, his writing hut and retreat in the woods.

Although he was not involved in cancer therapy or the search for new chemotherapy, his 1951 study of enzyme inhibitors and the quantitative measurement of enzyme products in the presence and absence of specific inhibitors led to the demonstration of the effects of two different inhibitors acting on the same overall system. It was proposed that combinations of chemotherapeutic agents be tried. The idea was soon applied to clinical situations, and the approach is now widespread.

After specializing in cancer research for 20 years, Dr. Potter entered the local political scene in 1960 on the side of those who were activists in the struggle to gain support for the Frank Lloyd Wright vision of a building on the shores of Lake Monona, in Madison. He became President of Citizens for Monona Terrace, and when Otto Festge, a pro-Terrace mayor, was elected he served on the Mayor’s Auditorium Committee. There he conceived his vision of a Monona Basin Project coupling the Terrace building with a congruent structure on the opposite shore. All efforts failed at that time, but 30 years later the Monona Terrace was approved, built, and dedicated on July 18, 1997.

At the international level, Dr. Potter presented lectures on his research. In addition, he coined the word “bioethics” in 1970. In 1971 he dedicated his first book on the subject to Aldo Leopold, a well-known Wisconsin professor who had much earlier called for a “land ethic”. He retired in 1982 and in 1988 published the book, Global Bioethics, Building on the Leopold Legacy. Until his death, Dr. Potter published a series of articles on his vision of bioethics as a bridge between the sciences and the humanities in the service of world-wide human health, and a protected environment.

— From the McArdle Laboratory Faculty Obituary.

Van’s three-dimensional paper model of the double-helix structure of DNA from his book Nucleic Acid Outlines, 1960.

Did you know that the US uses over 40% of the health dollars spent in the entire world? That TB, malaria, and other diseases related to poverty are on the rise? That the wealthiest 20% of the world’s people now make roughly over 60 times in income what the poorest 20% make? That the world’s population is rising at about 80 to 90 million people per year? That roughly a billion of the world’s people live at a consumption level that is way too much for the world as a whole to sustain even for the present population? That the U.S. exports pollutants and toxic wastes to Third World countries? That U.S. cigarette companies are among the major exporters of tobacco to Second and Third World countries and that the market is growing rapidly? That U.S.-based private hospital chains are building hospitals abroad intended to provide care for the wealthy around the world? That pharmaceutical companies have little interest in developing treatments for TB and malaria? That the First World uses the vast bulk of morphine, although the vast bulk of suffering and chronic disease is in the Third World?

— By the Environmental Bioethics group

The following poem was presented at the memorial service for Van Rensselaer Potter held on November 7, 2001. It was writen by his grandson, Josh Simon.

To Save the Earth 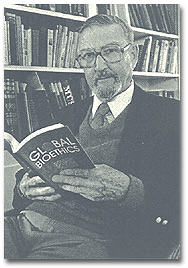 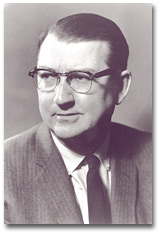 Information about The Madison Congregation