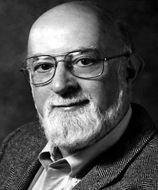 Thomas Benjamin was born in Bennington, Vermont, in 1940. He received his degrees from Bard College, Brandeis, Harvard and Eastman, studying composition with Carlos Surinach, Ernst Krenek, Arthur Berger and Bernard Rogers. Dr. Benjamin has composed works for all media, including concertos for violin, piano and viola, orchestral pieces, oratorios, cantatas, five operas, many song cycles and a great deal of chamber and choral music. More than 50 of his chamber, choral and keyboard works have been published.

A Unitarian composer and conductor, Tom Benjamin has enjoyed a distinguished career as composer, author, teacher, performer and conductor. He has won a wide variety of composition prizes in the U.S. and abroad and has received numerous grants, awards and commissions, from the National Endowment for the Arts, ASCAP, Meet-The-Composer, the National Music Theater Network, the Barlow Foundation and many others. Dr. Benjamin is a fellow of the MacDowell Colony, the Corporation of Yado, and the Virginia Center. He is the author of two books on counterpoint, published by Schirmer books, and co-author of three music theory texts, published by Wadsworth.

Still active as a composer, clarinetist and choral conductor, Dr. Benjamin taught for many years at the National Music Camp (Interlochen) and the University of Houston’s School of Music. He recently retired from teaching theory and composition at the Peabody Conservatory of The John Hopkins University, where he was for some years Chair of the Department of Music Theory.