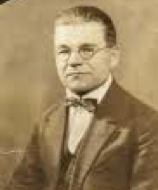 Norbert Fabian Čapek was born June 3, 1870 in the village of Radomysl in Bohemia (then a part of the Austro-Hungarian Empire). He was a raised as a Roman Catholic (then the dominant state-supported religion), but became a Baptist at the age of eighteen, and soon thereafter began a career as a minister, missionary, publicist, and composer of hymns. He served a congregation in Saxony for three years, then moved to Moravia, where he established a new congregation. In 1901 he was elected chair of the Union of Baptist Churches of Moravia and Slovakia. He published religious journals and became the assistant editor of a popular literary magazine. His religious stance became increasingly liberal, influenced by the “social gospel” movement of Walter Rauschenbausch and by the study of radical Christian movements in Czech religious history.

Čapek first became interested in Unitarianism in 1910, as a result of a meeting with Tomas Masaryk (then a professor, later to be President of Czechoslovakia). Čapek tried that year, without success, to get the American Unitarian Association to support his efforts to promote liberal religion.

At the beginning of World War I in 1914, Čapek moved to the United States, after being advised that he was in danger of arrest by Austrian authorities because of his nationalistic and anti-Catholic writings, Early in 1915 he was tried for heresy by a Baptist tribunal, but acquitted, and for the next three years he was pastor of the First Slovak Baptist Church in Newark. During this time he organized an alliance of the various Slovak associations in New Jersey, and was active in the movement for Czechoslovak independence.

At the end of World War I, Czechoslovakia became independent, and many Czechs decided to leave the Roman Catholic church. Čapek was eager to return to his native land and play a part in its spiritual reawakening. He and Maja decided in 1920 to sell their Belleville home to get money for the voyage. Because of a delay in the buyer’s payment, they found it necessary to vacate the house and rent an apartment in East Orange. While living there, they encouraged their three school-age children to try out various church Sunday schools and report back to their parents on the lessons. The one they finally found that pleased them was the First Unitarian Church of Essex County (in Orange). After the children had attended several times, Norbert and Maja also visited the church, and found there “not only clear heads but warm hearts, too.” They signed the membership book on January 10, 1921. The minister, Dr. Walter Reid Hunt, learning of Čapek’s intent to return to Czechoslovakia, arranged for him to meet the president of the American Unitarian Association, Dr. Samuel A. Eliot. By May, Čapek had a commitment from the AUA to support his work in Czechoslovakia. He bid farewell to the church in Orange on June 5, and he and Maja embarked for Europe June 30.

By February 1922, Čapek had organized the Prague Congregation of Liberal Religious Fellowship, and the services were soon drawing standing-room-only crowds. The Sunday sermon was repeated and debated in a Tuesday evening program. On June 24, 1923, the first Flower Communion was celebrated. Maja was ordained as a minister in 1926. For several years the fellowship met in rented halls. With financial help from the AUA and the British and Foreign Unitarian Association, they acquired and renovated a medieval palace. In 1930 the Unitarian Church of Czechoslovakia was officially recognized by the Czech government.

On March 28, 1941, Čapek and his youngest daughter Zora were arrested by the Gestapo. They were convicted of listening to foreign radio broadcasts. Čapek was sentenced to a year in prison, but eleven months that he had already been confined while waiting for trial were to be counted in the sentence. (Zora, who had not only listened to the broadcasts but shared notes of them with someone else, was given an eighteen-month term). In the midst of a wave of executions and deportations of Czechs by the Nazis following the assassination of Reinhard Heydrich (the German official in charge of the occupied country), a Gestapo officer overrode the court’s sentence and ordered that Norbert Čapek be sent to the concentration camp at Dachau, “return unwanted.” He arrived there July 5, 1942, and on October 12, 1942 was sent on an “invalid transport,” and evidently killed that day with poison gas, though his official death certificate states that he died October 30 of a cerebral hemorrhage.

Of the half dozen books he authored, Čapek considered K slunnemu brehu/Toward a Sunnier Shore (1929) his most important work. On the eve of World War II, in 1939, “at a time of great sadness for my nation,” he published a second edition, wishing it might spread “a few rays of sun to the wounds of the heart” the war would bring. Its essential message was that “people can choose their own moods [and] direct their own feelings,” and that they should, above all, “try everything with humor.” The book’s recommended approach to life bears a strong resemblance to Viktor Frankl’s logotherapy.

Subscribing to no theological system, Norbert Čapek celebrated the “hidden cry for harmony with the Infinite” in every soul. “Every person,” he wrote, “is an embodiment of God and in every one of us God struggles for higher expression.” “Religion,” he said, “can never die because human beings. . . cannot but be religious regardless of the form of [their] religion.” Religion should, before all else, provide that “inner harmony which is the precondition of strong character, good health, joyful moods and victorious, creative life.”

“It is my ideal,” he wrote, “that unitarian religion in our country should mean a higher culture. . . new attitudes toward life and practically a new race. . . . In short, unitarian religion should mean the next advanced cultural level of a certain people.” The church’s task, he felt,”must be to place truth above any tradition, spirit above any scripture, freedom above authority, and progress above all reaction.”

As for an afterlife, he felt that “if death were the end of everything, then life would be the stupidest of all comedies and would lack all meaning or purpose. . . . How could Providence abandon and betray us when our lips have barely touched the rim of the cup of life?”

Čapek defined religious education as “an endeavor to awaken the inner forces of the child and teach him how to organize, harmonize and adapt them to the ever-changing influences which come to him from outside.” He identified five ‘fundamental’ and five ‘supplementary feelings and abilities’ which a modern religious education should elicit from a child. They included, in his terms, the ability to have faith and confidence, the ability to hope, the feeling of worship (akin to Albert Schweitzer’s reverence for life), charity or selfless love, and conscientiousness. One characterized by these qualities could be said to be a truly religious person.

— The above is based primarily upon the book by Richard Henry, Norbert Fabian Capek: A Spiritual Journey 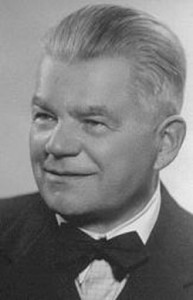 Norbert Fabian Capek was one of the martyrs of the free faith. Because he was an uncompromising foe of tyranny and a dauntless champion of freedom, he had to die. The Third Reich saw to that, for he and his religion were too dangerous to be tolerated. The method of extinction was bacteriological murder. His last six months were spent in the infamous concentration camp at Dachau—that, superimposed on a year of imprisonment in Prague, Budejovice, and Dresden. The judges at his trial dismissed the charge of high treason and imposed a sentence of one year for listening to the radio—a sentence already expiated by the thirteen months he had been in custody. Instead of being set free, however, he was sent, on the personal order of a Gestapo chief, to Dachau, with a note marked “return unwanted.”

It would be easy to dwell on his sufferings, to tell of the horrors to which he was subjected. The writer has visited the rooms where he was first questioned and seen the diabolical instruments that were used without mercy, and he has been in barracks and dungeons similar to those where he drew his last breath, and they were veritable hells on earth. But no good purpose would be served by concentrating on his closing days. For if life brings to our ears “the still, sad music of humanity,” it also brings a music that is neither still nor sad, but active and exultant. And that is thrillingly heard through Dr. Capek’s whole life, and particularly in the last months.

Dr. Capek was born in Radomysl, Czechoslovakia, in 1870. It is not without significance that one of his ancestors was Colonel Capek of the Hussite movement, who wrote the famous marching song, “The Lord’s Warriors.” The fierce blood of liberators flowed in his veins and caused him to set himself against the enemies of man’s spirit—not only the physical, visible foes, but those unseen adversaries—superstition and ignorance. He was a valiant soldier of liberty who marched under the banner of truth. Cradled in Catholicism, he quested for a larger and wider truth, and for a while he discovered that in Orthodox Protestantism. While working with his uncle in Vienna, he later said,

There were two possibilities open before me, for I met two young men there. One wanted me to go with him to a tavern, the other to a Baptist meeting. I chose the latter way and never regretted it, for my eyes and heart were opened at that meeting.

He studied for the ministry in the Baptist College and Divinity School in Hamburg, was ordained in 1895, and held pastorates in Saxony and Moravia for nineteen years.

Then, in 1910, he had a long conversation with Professor Thomas G. Masaryk, who was later to become the President of Czechoslovakia, and after listening to his views and beliefs, the great liberal thinker and statesman said to him, “You are a Unitarian.” In 1911 Dr. Capek and his wife came to America and served a Baptist church in Newark, New Jersey, and for a time edited a Slovak paper in New York. During the first World War when he and his family were living in Orange, New Jersey, Dr. Capek discovered through personal contact with Unitarianism how true Masaryk’s words were. Here was the gospel for which he had been searching. So, in 1921, he returned to Prague with a commission from the American Unitarian Association, and, with a glowing fervor that carried conviction, proclaimed his good news. He drew great congregations and soon established a church of 2,800 members, with eight mission stations in other towns and cities. He had a sturdy body, an alert appreciation, a well-stored mind, a vehement eloquence. Dr. Capek and his people were powers to be reckoned with in the life of the brave little republic. They supplied the basic spiritual foundations of democracy. That is why they were “a danger to the Third Reich.”

His work was not over when the prison doors closed on him. Like the alchemists of ancient Prague who sought to turn base metals into gold, so he took pain, frustration and defeat and fashioned out of them a shining glory. From his pen came mighty hymns of freedom—the bulk of them, it is true, destroyed by the Nazis, but some ten preserved, and sung with a fervor such as Americans give to “The Battle Hymn of the Republic.” Nor was his tongue silent. Surviving fellow prisoners tell in glowing words of the magnificence of his witness to the truths he proclaimed. By what he said and what he was he fortified and uplifted those among whom he dwelt. As one Catholic priest who was with him bore witness, “He achieved his greatest ministry there—among the despairing, who lived in the very shadow of death. Without him, we could not have endured.” He was put to death early in November, 1942.