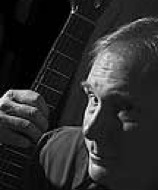 Jim has long been active in the Unitarian Universalist Church, and has visited over 300 UU churches across the country leading services, presenting concerts, and offering workshops. Three of Jim’s songs are included in the new Unitarian Universalist Hymnbook, and Gather The Spirit, has become a favorite across the denomination. Jim has served on the board of the UU Musicians Network, and was Co-Chair of the ecological/spiritual activist group the UU Seventh Principle Project. Through a grant from the Unitarian Universalist Association, Scott has compiled, edited and arranged an anthology of songs of ecology and peace, The Earth and Spirit Songbook.

Jim Scott is a finger-style guitarist, singer/songwriter and composer in the genres of jazz, classical and folk music. From Carnegie Hall and the Newport Jazz Festival (with the Paul Winter Consort) to a concert at the end of The Great Peace March for Global Nuclear Disarmament with folk legends Pete Seeger and Peter Yarrow, Scott has performed in 49 U.S. states (not Alaska yet), England, Scotland, Italy, France, Greece, Australia, Nicaragua, Mexico and Canada. His world tours have included a European tour with The Griffith Singers performing his choral music (in 1997), recording in the gardens of Findhorn, Scotland with jazz flautist Paul Horn, touring Nicaragua with Holly Near (in 1984), and performing in Australia for colleges and the Institute for Earth Education International Conference (in 1990). Scott has also shared the stage with such notable fellow musicians as John Denver, Tracy Chapman, Joan Baez, 10,000 Maniacs, Joni Mitchell, Jackson Browne, Dan Fogelberg, Odetta, Steve Gadd, Tony Levin, Nelson Rangell, Ed Tossing, and Tom Chapin.

In his years as guitarist for the Paul Winter Consort (1977-1984), Scott led thousands in the song Common Ground and his own eco-anthem, A Song For The Earth. He was co-composer of the Consort’s monumental choral work, Missa Gaia/Earth Mass, and recorded A Concert for the Earth in the Great Hall of the United Nations. While a member of the Consort, Jim also wrote several PBS soundtracks and composed and arranged a concert they performed with the Indianapolis Symphony Orchestra. From 1981 through 1983, Scott formed the instrumental group Radiance with fellow Paul Winter Consort veterans oboist Nancy Rumble and cellists David Darling and Eugene Freisen, and recorded three albums with them.