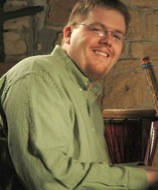 The Reverend Jason Shelton is a composer, arranger, conductor, singer, multi-instrumentalist, workshop and retreat leader and Director of Music at the First Unitarian Universalist Church in Nashville, Tennessee, a position he has held since 1998. He holds a BA in Classics from Saint Meinrad College – a Catholic seminary in Indiana. From there Jason went on to spend three years as a Franciscan brother in Chicago. As his spiritual journey took him further than the theological and institutional boundaries of the Catholic Church would allow him to go, he left the friars and moved home to Nashville.

At a friend’s invitation, Jason visited the First Unitarian Universalist Church of Nashville in the spring of 1998. He felt an instant connection there, and he was hired as Director of Music that summer. In his time at First UU, Jason has been exploring how a Unitarian Universalist ministry of music might come to life both in the congregation and the larger community. In the spring of 2003 he completed an M. Div. from Vanderbilt Divinity School, and was ordained to the Unitarian Universalist ministry in May of 2004. In 2008 the church called Jason as Associate Minister for Music, a role which calls forth not only his musical gifts but also those of the preacher, teacher and pastoral counselor that have been interwoven into his calling to the ministry all along.

In his ministry, Jason starts with the premise that “what we sing is who we are.” As a composer, conductor and song-leader he is fluent in a wide variety of styles, a quality he feels is important as a musical and spiritual discipline. He believes that we live in a world where our diversity can be celebrated, where the musics of many peoples intertwine and offer new possibilities for the sonic expression of our deepest values and commitments.

He has served on the board of directors for the Unitarian Universalist Musicians Network and was the first chair of its professional development initiative. He was also a member of the UUA’s New Hymn Resource Commission which created Singing the Journey, a supplement to its current hymnal, Singing the Living Tradition.