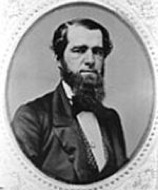 James Lord Pierpont (April 25, 1822 – August 5, 1893) was an American songwriter, arranger, organist, and composer, best known for writing and composing “Jingle Bells” in 1857, originally entitled “The One Horse Open Sleigh.” He was born in Boston, Massachusetts, and died in Winter Haven, Florida. His composition “Jingle Bells” has become synonymous with the Christmas holiday and is one of the most performed and most recognizable songs in the world.

James Lord Pierpont was born on April 25, 1822 in Boston, Massachusetts. His father, Reverend John Pierpont (1785-1866), was a pastor of the Hollis Street Unitarian Church in Boston. James was the uncle of the financier and banker John Pierpont Morgan. He was also an abolitionist and a poet. Robert Fulghum mixed him up with James Lord Pierpont in his book It Was On Fire When I Lay Down On It (1989) and erroneously attributed the authorship of “Jingle Bells” to Rev. John Pierpont. His mother was Mary Sheldon Lord, the daughter of Lynde Lord, Jr. (1762-1813), and Mary Lyman. John and Mary Pierpont had six children.

On March 27, 1852, James Pierpont published his composition “The Returned Californian”, based on his experiences in San Francisco, published in Boston by E. H. Wade of 197 Washington Street. “The Returned Californian” was originally sung by S. C. Howard, of Ordway’s Aeloians and was written expressly for Ordway’s Aeolians “by James Pierpont Esq.” and was arranged by John Pond Ordway (1824-1880). The song describes Pierpont’s experiences during the California Gold Rush and the failure of his San Francisco business: “Oh! I’m going far away from my Creditors just now, I ain’t the tin to pay ’em and they’re kicking up a row.

Later arrangements of the song changed the word “joy” to “fun” in the chorus and slightly simplified and streamlined the chorus melody, which was more musically complex in the original. In this slightly modified form, “Jingle Bells” became one of the most popular and most recognizable songs ever written.

In 1880, Pierpont’s son, Dr. Juriah Pierpont, M.D., renewed the copyright on “Jingle Bells” but he never made much money from it. It took considerable effort to keep his father’s name permanently attached to the song after the copyright expired. More information about Dr. Pierpont can be found at Pensacola Medical Heritage on St. John’s Historic Cemetery web page.

James Lord Pierpont died on August 5, 1893 in Winter Haven, Florida. At his request, he was buried in Laurel Grove Cemetery in Savannah beside his brother-in-law Thomas who had been killed in the first battle of Bull Run.

James Lord Pierpont’s 1857 composition “Jingle Bells” became one of the most performed and most recognizable secular holiday songs ever written, not only in the U.S., but around the world. In recognition of this achievement, James Lord Pierpont was voted into the Songwriters Hall of Fame. Everyone from Frank Sinatra to Tony Bennett to Glenn Miller to Bing Crosby to Duke Ellington to Ella Fitzgerald to Nat King Cole to Benny Goodman to Count Basie has recorded “Jingle Bells.” At a December 8, 2008 tree-lighting ceremony in Brooklyn, New York, the Associated Press (AP) reported that “Jingle Bells” was sung in twelve languages, including English, German, Portuguese, French, Romanian, Mandarin Chinese, Swedish, Norwegian, Korean, Spanish, Japanese, and Danish.

The Biography of John Pierpont