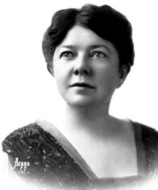 Amy Marcy Cheney Beach (September 5, 1867 – December 27, 1944) was an American composer and pianist. She was the first successful American female composer of large-scale art music. Most of her compositions and performances were under the name Mrs. H.H.A. Beach. She was born in Henniker, New Hampshire into a distinguished New England family. A child prodigy, she was able to sing forty tunes accurately by age one; she taught herself to read at age three, and began composing simple waltzes at the age of four. She began formal piano lessons with her mother at the age of six, and a year later started giving public recitals, playing works by Handel, Beethoven, Chopin, and her own pieces. In 1875, her family moved to Boston, where they were advised to enter her into a European conservatory. Her parents opted for local training, hiring Ernst Perabo and later Carl Baermann as piano teachers. At age fourteen, Amy received her only formal training in composition with Junius W. Hill, with whom she studied harmony and counterpoint for a year. Other than this year of training, Amy was self-taught; she often learned by studying classical pieces, such as Bach’s Well-Tempered Clavier.

She made her professional debut in Boston in 1883, playing Chopin’s Rondo in E flat and Moscheles’s G minor Concerto; shortly after she appeared as a soloist with the Boston Symphony Opera. Following her marriage in 1885 to Dr. Henry Harris Aubrey Beach – a Boston surgeon 24 years older than she – she agreed to limit performances to one public recital a year, with proceeds donated to charity. Following her husband’s wishes, she devoted herself to composition. Her first major success was the Mass in E Flat Major, which was performed in 1892 by the Handel and Haydn Society. The well-received performance of the Mass moved Beach into the rank of America’s foremost composers. She composed the Jubilate for the dedication of the Woman’s Building at the Columbian Exposition (New International Encyclopedia).

After her husband died in 1910, she toured Europe as a pianist, playing her own compositions. She was determined to establish a reputation there as both a performer and composer. She returned to America in 1914, where she spent time at the MacDowell Colony in Peterborough, New Hampshire. In 1915, she wrote “Ten Commandments for Young Composers”, which expressed many of her self-teaching principles. Beach later moved to New York, where she became the virtual composer-in-residence at St. Bartholomew’s Episcopal Church. She used her status as the top American woman composer to further the careers of young musicians; serving as leader of several organizations, including the Society of American Women Composers as its first president. Heart disease led to Beach’s retirement in 1940 and her death in New York City in 1944.

Her compositions include the Mass in E flat Major (1892), the Gaelic Symphony (1896), a violin sonata, a piano concerto, the Variations on Balkan Themes, a piano quintet, several choral and chamber music compositions (including the Pastorale for winds), piano music, and the opera Cabildo (1932). She was most popular, however, for her songs. Her writing is mainly in a Romantic idiom, often compared to that of Brahms. In her later works she experimented, moving away from tonality, employing whole tone scales and more exotic harmonies and techniques.

On July 9, 2000 at Boston’s famous Hatch Shell, the Boston Pops paid tribute to Amy Beach. Her name was added to the granite wall on “The Shell.” It joins 86 other composers such as Bach, Handel, Chopin, Debussy, Edward MacDowell, and Beethoven. Amy Beach is the only woman composer on the granite wall.