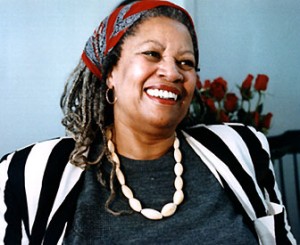 A Pulitzer Prize-winning novelist (for Beloved, in 1988), Toni Morrison is also the recipient of the National Book Critic’s Circle Award (1977), the American Academy and Institute of Arts and Letters Award (1977), the Robert F. Kennedy Book Award (1987-88), the Anisfield-Wolf Book Award (1988), the Modern Language Association of America Commonwealth Award in Literature (1989), the National Book Foundation Medal for Distinguished Contribution to American Letters (1996), and the National Humanities Medal (2000).

Toni Morrison’s rise to greatness did not happen overnight. The Robert F. Goheen Professor in the Humanities at Princeton University was born Chloe Anthony Wofford on February 18, 1931. A native daughter of Lorain, Ohio, she graduated with honors from Lorain High School in 1949. In 1953 she received a B.A. in English from Howard University, where she changed her name to Toni—an abbreviation of her middle name. Two years later, she earned an M.A. from Cornell University. In 1958 she married Harold Morrison, and several years later joined a small writer’s group for which she wrote a short story about a girl who prayed to God for blue eyes. That story she later developed into her first novel, The Bluest Eye (1970).

For much of the 1960s and ’70s, Morrison balanced a writing career with parenting (she is the mother of two boys) and extensive careers in publishing and academe. In 1989, when she accepted the Robert Goheen Professorship, becoming the first black woman to hold a chair at an Ivy League university, she said, “I take teaching as seriously as I do my writing.”

Since then, she’s taught creative writing and participated in the African-American Studies, American Studies, and Women’s Studies programs at Princeton. Prior to her appointment at Princeton, Morrison held teaching positions at Texas Southern University, Howard University, Yale, and the State University of New York at Purchase. Simultaneously, she pursued a career as an editor at Random House between 1965 and 1983.