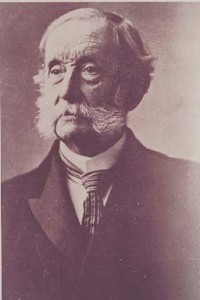 Called a man whose whole life was a “sermon on freedom,” Higginson had a fascinating career as minister, editor, writer and abolitionist. He was born on December 23, 1823 in Cambridge, Massachusetts. His father died when he was 11. The youngest in his class, Higginson matriculated at Harvard College when he was 14, and graduated in 1841. He was already writing poetry, and had four poems published in 1843.

He entered Harvard Divinity School in 1844, and although he dropped out for a time, he graduated in 1847. His Visitation Day student sermon was on the clergy and reform. That same year he was called to serve the First Religious Society, Unitarian, in Newburyport, Massachusetts. He also was married to Mary Channing at this time. His radical social views quickly led to his dismissal from the pastorate in Newburyport, but he remained in the area to begin a lecturing career. He became an ardent abolitionist, and helped form the Boston Vigilance Committee to resist the Fugitive Slave Law. He also helped convene the Worcester Woman’s rights Convention in 1850, and ran for Congress on the Free Soil ticket, but lost.

In 1852 Higginson was called to serve Worcester’s Free Church. He was twice in involved in cases involving runaway or former slaves, Thomas Sims in 1851 and Anthony Burns in 1854. He was indicted in the Burns case, but never prosecuted. His sermon “Massachusetts in Mourning” was about the response to the Fugitive Slave Law. Later in the decade he recruited and armed settlers in Kansas to keep it from becoming a slave state. He met with John Brown in 1858, and agreed to support him financially. After Brown was captured he made a plan to rescue him. After this he wrote about many slave revolt leaders. Although he is frequently remembered as an activist, Higginson’s chief reputation was as a writer, and he became a regular contributor to the Atlantic Monthly, especially nature essays.

After the Civil War began, Higginson showed interest in forming a regiment. Eventually he became a colonel of the first regiment of freed slaves, and after the training period, went into battle with them. He received a medical discharge after he was wounded. Articles began to appear on this experience, which later evolved into the book which became a classic in American history, Army Life in a Black Regiment (1870).

Higginson continued his other literary interests as well. In 1862 he began a correspondence with the reclusive poet Emily Dickinson, and later edited her poems. His first book, Outdoor Papers, essays on nature, was published in 1863. He moved to Newport, Rhode Island, where as a member of the local school board he worked on integrating the schools.

Higginson became one of the founders of the Free Religious Association (FRA). One lecture for them, which was later republished for the World Parliament of Religions, was called “The Sympathy of Religions.” First written in 1855, he wrote, “The human soul, like any other noble vessel, was not built to be anchored, but to sail… Every year brings new knowledge of the religions of the world, and every step in knowledge brings out sympathy between them.” (Howard, N. Meyer, ed., The Magnificent Activist, p. 354-355)

He continued to write and publish essays, but achieved his greatest popularity with a bestseller, Young Folks’ History of the United States. In 1877 his wife Mary died after a long illness. That same year he began two long-standing associations. First, he signed on as a contributing editor of the Woman’s Journal, which was the principal publication of the American Woman Suffrage Association. He also began a stint as poetry editor of The Nation, a position he held for 26 years. He was remarried within two years to Mary Thacher, and they moved back to Cambridge. In 1881 a daughter Margaret was born.

In 1884 Higginson published a biography of Margaret Fuller Ossoli. He also began to write a regular column for Harper’s Bazaar, “Women and Men,” where he continued a lifelong fight to end the stereotyping of women.

Higginson was one of the first people to show the connection between smoking, addiction and cancer. In 1888 he ran for Congress, but lost. Even though Emily Dickinson had died four years previous, Higginson found a publisher and co-edited her first volume of poems. Another volume soon followed, as he continued to write and publish essays at a prodigious pace. In 1895-96 Higginson published a two-volume edition, Massachusetts in the Army and Navy during the War of 1861-1865. Seven volumes of his collected works were published in 1900. Into the new century he continued to write, especially biographies, including one on his father, Stephen Higginson. More essays followed, including the beginnings of a series on beliefs about immortality, but its completion never occurred.