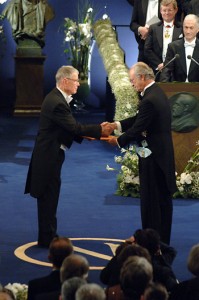 2005 Nobel Prize Laureate in Economics Thomas Schelling has expertise in foreign affairs, national security, nuclear strategy and arms control. He came to the Maryland School of Public Affairs after twenty years at the John. F. Kennedy School of Government, where he was the Lucius N. Littauer Professor of Political Economy.

Schelling has been elected to the National Academy of Sciences, the Institute of Medicine, and the American Academy of Arts and Sciences. In 1991, he was president of the American Economic Association, of which he is a Distinguished Fellow. He was the recipient of the Frank E. Seidman Distinguished Award in Political Economy and the National Academy of Sciences award for Behavioral Research Relevant to the Prevention of Nuclear War. He served in the Economic Cooperation Administration in Europe, and has held positions in the White House and Executive Office of the President, Yale University, the RAND Corporation, and the Department of Economics and Center for International Affairs at Harvard University.

Schelling has published on military strategy and arms control, energy and environmental policy, climate change, nuclear proliferation, terrorism, organized crime, foreign aid and international trade, conflict and bargaining theory, racial segregation and integration, the military draft, healthy policy, tobacco and drugs policy, and ethical issues in public policy and business. His most famous book, The Strategy of Conflict, is considered one of the most influential books in the West since 1945.

—Courtesy of the University of Maryland School of Public Policy

Click here for supplemental reading about Thomas Schelling on Amazon.