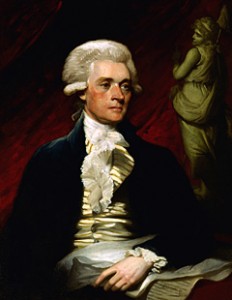 The author of the Declaration of Independence was President Washington’s secretary of state before he himself became a vice president—and ultimately the President of the newly-formed United States.

In 1803, Jefferson’s purchase of Louisiana doubled the size of the Union and enabled the American expansion that characterized much of the nineteenth century.

An architect by training, who designed his own home, he retired as the “Sage of Monticello.”

For 18 years he was the president of the American Philosophical Society.

One expression of his Unitarian faith was his compilation of The Life and Morals of Jesus of Nazareth, sometimes called The Jefferson Bible. He is also remembered for saying, “I trust there is not a young man now living who will not die a Unitarian.”