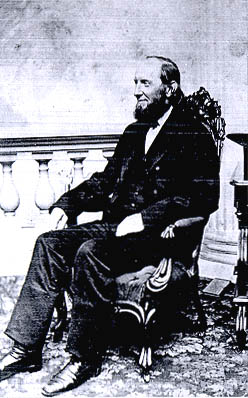 Thomas Hill, the twenty-first president of Harvard University, was confirmed October 6, 1862; and resigned September 30, 1868. Born at New Brunswick, N. J., June 7, 1818, of English parents, who had been in this country for thirty years, he was apprenticed to the “Fredonian” newspaper in that city in 1830, and remained connected with it until 1833. After a year at school, he was apprenticed to an apothecary of his native place, with whom he remained until 1838, when he left to prepare for college.

He entered Harvard in 1839, graduated in 1843, with rank of second scholar, and took the diploma of the Divinity School in I845. Ordained at Waltham the day before Christmas of that year, he retained his pastorate fourteen years, and then was called to succeed Horace Mann at Antioch College, Yellow Springs, Greene County, Ohio. When the breaking out of the Civil War crippled that institution and forced it to suspend, Dr. Hill accepted the Presidency of Harvard University, which he retained until failing health compelled him to resign.

After two years of rest he represented the town of Waltham in the Legislature of Massachusetts for the year 1871, and spent the next winter on the United States Coast Survey steamer Hassler, in its voyage around South America. Finding his health restored by the voyage, he accepted a call from the First Parish in Portland, Maine, and was installed over that church, May 18, 1873.

Dr. Hill’s literary labors have been mostly of a fugitive character; contributions in prose and verse to various periodicals, and papers printed in the Proceedings of the American Association for the Advancement of Science with occasional Addresses and Sermons, a few volumes of mathematical textbooks, one of collected Sermons, and a little tract on Natural Theology.

During his pastorate at Waltham he interested himself greatly in the public schools of the town, and endeavored to bring the course of instruction into conformity with the natural order of studies and the natural affiliation of sciences. His views upon this subject first found expression in a scheme of the natural order of studies, drawn up by him in January 1843, published in an address delivered before the Harvard Natural History Society, more fully in a Phi Beta Kappa address, and afterward in various papers in Barnard’s Journal of Education and the Ohio Common School Journal.

Dr. Hill was also the inventor of an instrument now in possession of the Observatory, designed to represent the moon’s motions as affected by parallax, and thus to project oscillations and eclipses.

Dr. Hill has especially distinguished himself as a mathematician, and at the same time has been recognized as one of the foremost investigators and adepts in various departments of natural science. He is also an accomplished classical scholar, and has made himself conversant with the Hebrew and cognate Oriental languages. His present position, in a parish containing a singularly large proportion of professional men and families of superior culture, is eminently congenial to his tastes and his mental habits, and no preacher of his time is exerting a more substantial and healthy influence in the cause of an enlightened and conservative Christian faith, and in those great social interests which are inseparably connected with the cause of religion and the work of the Christian minister.

Thomas Hill wrote of an excursion by rail to Littleton, New Hampshire, led by Harvard zoologist Louis Agassiz, accompanied by Hill, later Harvard president C. C. Felton, and others. Below is an excerpt.

I was surprised, during the journey, to find that Agassiz knew the plants along the road as well as I did. I never knew him make any mistake in naming a wild plant, but once; and then it was a mere slip of the tongue, calling a Lespedeza a Hedysarum.

We started on this expedition in an accommodation train which had picked up one man at Charlestown, two or three others at Cambridge, and myself at Waltham. But at the end of the first twenty-five miles, all got out at South Acton and waited for the express train. While thus waiting we all utilized the time in hunting for specimens of animal life, for Agassiz. His son Alexander had a gauze net at the end of a pole with which to catch butterflies. Agassiz seeing a fine specimen on the wing called to the boy to come and catch it. “Alexe! Vite! Beau Papillon.” The boy ran up and seeing that his fine butterfly was a black beetle, burst into such a merry laugh, that none of us, not even Mr. Felton himself, could resist joining; and “Beau Papillon” became the watch-word of our party.

From Littleton we took stages for Franconia Notch. There was but one other passenger in the coach, an exceedingly solemn-looking man, and very silent. He was apparently shocked by the levity and gayety of our party; who, although a science bent, all had a cheerful mind. When we came to the foot of a long hill, we all got out and walked, except Professor Cornelius Felton who remained on the seat with the driver. As we were turning over stones and sticks, for hidden reptiles or insects; looking on the under side of leaves to discover butterflies, or snails; rapping the bushes to start little moths, and occasionally shouting one to another “Beau Papillon”; the driver asked Professor Felton who these men were, that were with him. He replied, “they are a set of naturalists, from an institution near Boston.”

Our zoological pursuits retarded our movements up the hill so much that the coach had got far ahead of us, and our van was led by the solemn man, who had not taken any part in our performances. As we drew near the top of the hill, however, a remarkably beautiful butterfly went in front of him. The flush of his boyhood seemed instantly to return. He took off his hat, and made a sweep for it; and as the butterfly easily eluded him, he made a second and a third; growing more and more eager, till, at length, as the butterfly rose and soared over a high clump of bushes, our solemn man leaped into the air, made his last frantic swoop, and screamed, at the top of his voice, “Beau Papillon.” At that moment, the stage in the opposite direction met ours, at the top of the hill. The drivers paused a moment to exchange salutations, and the other said to ours, “Why! You’ve a strange freight down there. Who are they?” Our driver, leaning toward him, said in a confidential whisper, “They are a set of naturals from that insane asylum near Boston. Their keeper just told me so.”

A Gallery of the Life of Thomas Hill 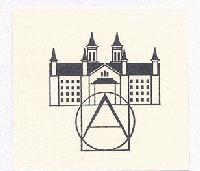