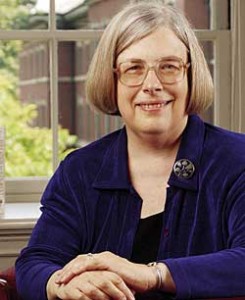 Theda Skocpol is the Victor S. Thomas Professor of Government and Sociology and dean of the Graduate School of Arts and Sciences at Harvard University. She has also served as Director of the Center for American Political Studies at Harvard. In 1996, Skocpol served as President of the Social Science History Association, an interdisciplinary professional group; and from 2001 to 2003 she served as President-Elect and then President of the 14,000-member American Political Science Association.

The author of nine books, nine edited collections, and more than seven dozen articles, Skocpol is recognized as one of the most cited and widely influential scholars in the modern social sciences; her work has contributed to the study of comparative politics, American politics, comparative and historical sociology, U.S. history, and the study of public policy. Her first book, States and Social Revolutions: A Comparative Analysis of France, Russia, and China (1979), won the 1979 C. Wright Mills Award and the 1980 American Sociological Association award for a Distinguished Contribution to Scholarship.

—Courtesy of the Department of Government, Harvard University

Diminished Democracy: From Membership to Management in American Civic Life by Theda Skocpol.