The Schooling of Ralph Waldo Emerson

Northeast view of Harvard College in 1823.
Courtesy of the Harvard University Archives.

The early education Emerson received at home would serve him well in school. His mother had introduced him to readings that were spiritual and emphasized self-knowledge and religious self-cultivation. His aunt, Mary Moody Emerson, exposed him to great thinkers present and past and challenged him to think independently. Another relative, Sarah Alden Bradford Ripley, knew languages, literature, science, and philosophy and tutored boys for entrance to Harvard College. Emerson was well nourished by this extraordinary circle of intellectual and spiritual women, and their friends, who set a high standard of learning and accomplishment in the Emerson home.

From 1812–1817 Emerson attended Boston Latin School, enrolling when he was nine years old at a time when war with Britain was at hand. The Latin School was the oldest public school in the nation, and known for its rigorous curriculum for boys who usually entered Harvard. Emerson followed the same path when he enrolled at Harvard in 1817 atthe age of fourteen— not unusually young for the time. He had received a small scholarship from the First Church in Boston, but he was still very poor. Emerson made his way through Harvard by ushering, waiting tables, tutoring, winning elocution prizes, and serving as the president’s errand boy. During school vacations, he taught at his Uncle Samuel Ripley’s school in Waltham, Massachusetts. 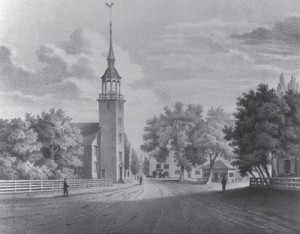 At Harvard, Emerson began his lifelong practice of keeping a journal. He regarded them as his “savings bank,” where he could express and examine ideas without public exposure. He also wrote poetry in hisjournals, and illustrated many of his pages professing his early “hunger and thirst to be a painter.” His writing, however, was recognized when he receivedBowdoin Prizes for his 1820 Dissertation on the Character of Socratesand his 1821 Dissertation on the Present State of Ethical Philosophy. He also decided to drop the name “Ralph” and call himself “Waldo.”

Waldo Emerson graduated from Harvard in 1821 at eighteen years of age and began teaching in the school for girls his brother, William, ran out of the family home on Boston’s Federal Street. He continued to write, and to read voraciously the work of European, especially Scottish, philosophers.

“The advantage in education is always with those children who slip up into life without being objects of notice.” —Ralph Waldo Emerson