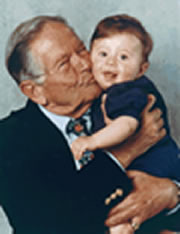 As one of America’s best-known pediatricians, Dr. T. Berry Brazelton’s books are likely to be found on the shelves of anxious parents beside the classic Dr. Spock’s Baby and Child Care.

Over the years, Brazelton’s work has focused on individual differences among infants, attachment between parents and infants, and preventative pediatric healthcare. He has 28 books on pediatrics and child development to his name. And his first book, Infants and Mothers, has been printed in 18 languages and sold more than a million copies.

Brazelton is Clinical Professor Emeritus of Pediatrics at Harvard Medical School and Professor of Psychiatry of Human Development at Brown University. He earned his M.D. in 1943 from Columbia University, and in 1951, he became an instructor at Harvard Medical School where he began conducting research to help parents better understand their children. In 1972, with Dr. Edward Tronick, he co-founded the Child Development Unit at the Children’s Hospital in Boston, Massachusetts.

The following year, Brazelton and his colleagues developed the Brazelton Neonatal Behavioral Assessment Scale, an evaluation tool used to assess physical and neurological responses in infants. That scale continues to be used in research and clinical settings around the world, and Brazelton has said that he considers it to be his greatest contribution to the field of pediatrics.

In addition to writing books, Brazelton writes the weekly Families Today column for the New York Times Syndicate and was featured on the long-running Lifetime TV series, “What Every Baby Knows.”