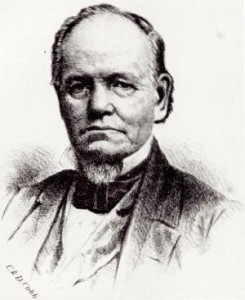 The most important Universalist reformer before the Civil War, Cobb was born on July 17, 1798 in Norway, Maine, where Maine’s first Universalist church was founded the following year. Cobb attended district schools, and received some instruction at Paris Hill. He converted to Unversalism when he was sixteen, and at age twenty studied with Sebastian Streeter in Portsmouth, New Hampshire. He was an itinerant preacher until July 1821 when he was called to serve societies in Waterville and Winthrop Maine, where he stayed for seven years. His ordination in Winthrop in 1821 marked the first Universalist ordination in the state. In 1828 he moved to Malden, Massachusetts for a ten-year ministry.

In 1839 Cobb established the Christian Freeman and Family Visiter[sic], which became the first Universalist paper to advocate for a number of social reforms, especially slavery. Cobb had briefly worked as an associate editor in Haverhill during his ministry in Malden, but knew little about managing a newspaper. He was roundly criticized for the primary political focus of his periodical, but he persevered. Thomas Whittemore had tried to avoid such controversial subjects in his Trumpet. Cobb began publishing while living in Waltham, Massachusetts where he had been serving the Universalist church since 1838. He moved to East Boston in 1841, to serve a society that met in an old bathhouse. The church prospered, but Cobb resigned to devote more time to the paper. The church did not do well without him, and he returned, but then the owners moved the bathhouse, and after that Cobb resigned.

In the meantime Cobb’s paper was converting large numbers of clergy to various reform causes. By 1845 subscription had grown to 3,000 from an initial list of 300. Cobb was also having an effect on denominational actions against slavery. In 1840 he was one of the organizers of the Universalist Anti-Slavery Convention in Lynn, Massachusetts. In 1843 the General Convention met in Akron, Ohio and passed a resolution condemning slavery. Cobb was part of a committee who worked on a petition, “Protest Against American Slavery,” which was circulated among the clergy in 1846 protesting slavery. Eventually 313 Universalist ministers signed it. Cobb was also lecturing agent for the Middlesex County Temperance Society. His temperance views were tested during his East Boston ministry when the race track at Suffolk Downs was opened in 1842. He also actively spoke out against the death penalty.

During these years Cobb acquired two struggling papers, Gospel Messenger and Gospel Fountain, and merged them with the Freeman. His paper also included denominational, theological and secular news as well as the writing of abolitionists like Sarah Grimke and the proceedings of various meetings. In 1861 Cobb published a serial history of spiritualism. The Freeman lasted until 1862, when it was merged with the Trumpet after a complicated procedure. Cobb served briefly as senior editor until the paper was completely absorbed by the new New England Universalist Publishing House. He was theological editor for another two years until 1864, but he continued to write for another publications as well. He spent his last years finishing New Testament with Notes (1864). Earlier in his career he had supported a resolution before the Boston Association in 1847 calling for complete acceptance of the Biblical account of Christ’s life, death and resurrection. He died on October 31, 1866 in Boston.