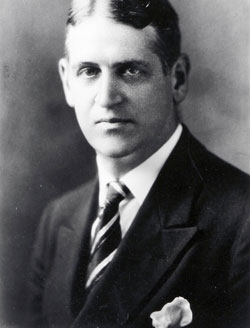 Sydney Bruce Snow was born in Winchester, Massachusetts, March 16, 1878. His father was a descendant of early Cape Cod settlers. His mother, Helen Florence Winde, was of Danish ancestry. The family was associated with the Congregational Church in Winchester. Upon graduation from Harvard College in 1900, his literary bent led him into the field of journalism, and he went to work on the Boston Transcript. On Christmas 1901, he married Margrette Kennedy of Cambridge at the summer home of the Kennedy family in Windsor, Vermont. This beautiful estate in Vermont, which ultimately became the property of the Snows, played an important part in Sydney Snow’s life. It was there that he spent his summers whenever he was not abroad, delighting in the care of the forests, tramping in the hills, riding horseback and especially entertaining his friends and acquaintances.

While engaged in newspaper work, he became interested in the Unitarian Church and his deeply religious nature moved him to enter the Harvard Divinity School. On graduation in 1906, he, his wife and two small sons moved to Palo Alto, California, where he was ordained and took up the work of the recently organized church. The handsome young minister with his great gift for friendship at once won the hearts of his parish and of the community. A little chapel of unusually imaginative character was built, which fitted the quality and character of the worship. From the beginning, Sydney Snow’s gift for expressing the aspirations of his people in prayer was evident. To him, prayer was the heart of a service and throughout his life he devoted much thought to the preparation of the words by which he strove to lift worshipers into communion with God.

His three years in Palo Alto were followed by three years as minister in Concord, New Hampshire, and in 1912 he was called to be the associate of Dr. Howard N. Brown at King’s Chapel in Boston. A bond of affection tied the younger man and the older man together and these years were happy ones, until America entered the first World War. Sydney Snow was a convinced pacifist, and he was unable to support the war enterprise to the satisfaction of some of the members of the Church. It should be added that at the outbreak of the second World War the Nazi threat to civilization obliged him to abandon the pacifist position.

In his summer vacation in 1917, he gave his services to the Red Cross in the Third Naval District. The following year he went to Germany to serve with the Army Educational Corps of the A.E.F. In March 1920, King’s Chapel again granted him leave of absence to go as chairman of a commission sent by the American Unitarian Association to investigate the condition of the Unitarian Churches in Transylvania. The plight of the churches under the new Rumanian rule stimulated the sister churches of the faith in America to render aid. The commission rendered a priceless service of relief and encouragement and Sydney Snow brought back with him not only an honorary membership in the Chief Consistory of the Unitarian Churches of Transylvania but friendships which were to be kept alive throughout his life.

On his return, he accepted a call to the Church of the Messiah in Montreal where he remained until 1926. Again he established a place for himself in the affections and admiration of his people and his Montreal days were forever afterward a fond memory.

Then in 1928, came the call to the presidency of the Meadville Theological School in Chicago, where he served until his death in April 1944. Both as an able administrator and as teacher of Practical Theology, he maintained high standards for his students and exerted an influence much wider than his formal duties would suggest. It was under his leadership that the Meadville School became one of the four theological schools that were united in the Federated Theological Faculty of the University of Chicago. As for the students who came and went during these years, the memory of the late afternoon hour, when his home was always open for informal conversation, is indelible.

Sydney Snow was a frequent visitor to Europe, climbing in the High Tatras in Slovakia, canoeing down the Thames, or preaching in English churches. He was made an honorary member of the British Assembly of Unitarian Churches. The degree of D.D. was conferred on him by Meadville in 1923 and the degree of Ph.D. by the Royal Hungarian Francis Joseph University in Szeged in 1938.

Of fine physical appearance and personal charm, with a tender strength that made his presence felt, of a simplicity of nature that made him always open and frank, Sydney Snow was a delightfully companionable man. His devotion to the Unitarian cause was such that no tax upon him was too great and no occasion too insignificant for him to give himself. His influence was primarily through personal contact and many were the persons whose lives were “touched to a finer end” by association with him.