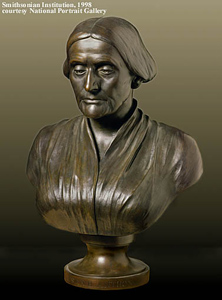 After her father lost his management position when the town’s cotton mill collapsed in the panic of 1837, Susan taught school for ten years and then ran her father’s farm near Rochester. In 1851 she met Elizabeth Cady Stanton, with whom she labored for the rest of her life to win women’s rights, including the right to vote. While Stanton had responsibilities as a mother, Anthony traveled ceaselessly. Together they founded the Women’s National League, which gathered and presented to Congress, through Senator Charles Sumner, petitions with 400,000 signatures for the abolition of slavery.

Together Anthony and Stanton founded the National Women’s Suffrage Association (NWSA) in 1869. When Anthony joined a group to vote in Rochester in 1872, she was arrested and sentenced, but she refused to pay the fine. When she died she left a legacy symbolized by the fact that women suffragists celebrate the Nineteenth Amendment to the Constitution of the United States as the Susan B. Anthony Amendment.