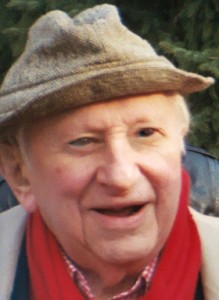 Studs Terkel, prize-winning author and radio broadcast personality, was born Louis Terkel in New York on May 16, 1912. His father, Samuel, was a tailor, and his mother, Anna (Finkel) was a seamstress. He had three brothers. The family moved to Chicago in 1922 and opened a rooming house.

Terkel credits his knowledge of the world to the tenants who gathered in the lobby of the hotel and the people who congregated in nearby Bughouse Square, a meeting place for workers, labor organizers, dissidents, the unemployed, and religious fanatics of many persuasions. In 1939 he married Ida Goldberg and had one son.

Terkel attended University of Chicago and received a law degree in 1934. He chose not to pursue a career in law. After a brief stint with the civil service in Washington, D.C., he returned to Chicago and worked with the WPA Writers Project in the radio division.

In 1944, he landed his own show on WENR. This was called “The Wax Museum Show,” and allowed him to express his own personality and play recordings he liked from folk music, opera, jazz, or blues. A year later he had his own television show called “Stud’s Place” and started asking people the kind of questions that marked his later work as an interviewer.

In 1952 Terkel began working for WFMT. The interviewing came along by accident. This later became the award-winning, “The Studs Terkel Program.” His first book, Giants of Jazz, was published in 1956. Ten years later his first book of oral history interviews came out. Terkel continues to interview people, work on his books, and make public appearances. He is Distinguished Scholar-in-Residence at the Chicago Historical Society.

—Courtesy of the Chicago Historical Society