1921 – Fritchman as a student at Wharton School of Finance, University of Pennsylvania.

Stephen Hole Fritchman was born in Cleveland, Ohio on May 12, 1902 to Quaker parents of German-English descent: Addison and Esther (Hole) Fritchman. In his childhood home the Bible was read every morning before breakfast. His schooling and early professional career aligned him closely with religious and social orthodoxy. After a year at the Wharton School of Finance and Commerce, University of Pennsylvania, he attended Ohio Wesleyan University, receiving his BA degree in 1924. He remained there for a year as an instructor of English Bible.

From 1925 to 1927 he was religious news editor of the New York Herald Tribune. In 1928-29 he was associate editor of the Methodist Church School Journal. His first preaching was in Methodist pulpits in New York state. He had received his BD from Union Theological School in 1927 and an MA from New York University in 1929. When he moved to Boston, he was an associate professor of English in the School of Religious Education at Boston University from 1929 to 1932. At the same time he was a student at Harvard Graduate School 1930-1932.

His formal connection with Methodism terminated in 1930 when he began a two year pastorate at the Unitarian Church in Petersham, Mass. He was ordained in 1930 into the Unitarian ministry. After Petersham, he spent six years at the Bangor Unitarian Church in Maine. From there he entered the educational and organizational work of the American Unitarian Association in Boston. He was youth director for the AUA from 1938 to 1947. In 1942 he also became editor of the AUA journal, The Christian Register. 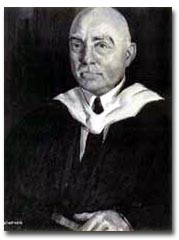 He continued in his dual role until an eighteen-month controversy developed over his editorial policies and direction. Termed “the Fritchman Crisis,” it sparked charges and countercharges. Defenders held that he had taken a dull, denominational house organ and transformed it into a dynamic magazine, one that was timely, relevant, and controversial. Opponents agreed on the controversial part of that statement, but accused him of following a Communist line, of supporting Soviet policies in the denominational magazine. After a bitter ecclesiastical fight, he resigned in 1947.

The following year he became minister of the First Unitarian Church of Los Angeles, CA, and continued in that position until his retirement in 1969. Under his leadership the church became a center of resistance to the Cold War and entered creatively into the conflicts of those years. It vigorously supported liberal causes in the city and state. He himself was active in many organizations concerned with peace and civil liberties.

In his retirement he continued active in the causes which had enlisted his support all his life, as ever cheerful, energetic, and with a finely tuned sense of humor. In 1976 at Claremont, CA, he received the Annual Award of the UUA for Distinguished Service to the Cause of Liberal Religion. The Unitarian Universalist Service Committee, which he supported all his life, named its annual award after him in his honor.

His published works include Men of Liberty, “Unitarianism Today,” Young People in the Liberal Church, and Heretic: A Partisan Autobiography.

He called himself a heretic and called the Unitarian Universalist church a radical organization. Both friends and critics would affirm that he was correct about the first, and the kind of church he gathered around him in Los Angeles made him right about the second. In his earlier years he was frequently viewed as a highly controversial figure because of his espousal of radical causes. He focused his intellect, talents, and energy on the great causes of our time—peace, disarmament, racism, the ongoing struggle against intolerance and hatred.

Some applauded his pursuit of justice; others saw him moving with uncritical enthusiasm, almost boyish impetuousness, after well meaning but unthought out goals. His difficulties dramatize how hard it is to be a citizen of one world when that world is divided into a galaxy of competing nations.

He was nine years a denominational leader but twenty-eight years a parish minister. It is often overlooked that he was an excellent minister with a strong sense of churchliness exemplified in his attention to all the areas of church life, from his worship services through his preaching to his pastoral relationships‚Äîalways he had a concerned ear, a caring heart.

As his UUA Award citation said, “there is little which has not felt your influence.” And he himself said in his address to the UUSC, “If we truly believe that human beings are of supreme importance, we will not be neutral.” Nobody ever claimed that Stephen Fritchman was neutral.

— By Carl Seaburg. From the Unitarian Universalist Association Directory, 1981-82.

What follows is from the concluding selection in For the Sake of Clarity: Selected Sermons and Addresses by Stephen H. Fritchman edited by Betty Rottger and John Schaffer (Prometheus Books, 1992).

Since tonight’s celebration opens the first door for the 1977 centenary of the founding of the First Unitarian Church of Los Angeles by Caroline Severance and her friends, we may appropriately indulge in a little sectarian pride and comment on the participation of our honored guests as members of this society of heretics since 1962. Mrs. Pauling, besides speaking from our pulpit and in the Severance Room, was a member of the steering committee of our Unitarian Public Forum in its most vibrant years, along with Janet Stevenson, David Clavner, Elmer Mahoney, Madeline Borough, Gene Stone, and Martin Hall. They all deserve laurels for the energy dedicated to making the Unitarian Church a center known across the nation where speakers appeared when no lecture agency would handle them. Our Forum was a dissenter’s holy campground, a glorious center for prophets and pariahs. Ava Helen spoke on women’s liberation around the world, as she also bore constant witness to the primacy of peace, civil liberties, and civil rights. Here tonight we salute her leadership on these and other concerns, as manifested at our Eighth Street citadel in those rugged days when subpoena-servers lurked around every corner of what Art Seidenbaum has called “our hot-bed of non-violence.”

On May 15, 1957 Dr. Pauling wrote and issued the now famous Scientists’ Appeal to Stop the Testing of Nuclear Bombs, following a lecture at Washington University in St. Louis. In a week he had twenty-six signatures; ten days later two thousand American scientists had already signed it. Shortly thereafter, he and Ava Helen sent out from their Pasadena home, helped by a voluntary task force some of whom were such sister Unitarians as Mary Clarke and Janet Stevenson, letters asking for signatures from scientists all over the world. Seventy-five hundred scientists sent their signatures, including thirty-seven Nobel Laureates. Fulton Lewis, Jr. surmised in his syndicated column that some sinister organizations must have invested at least $100,000 in this vast achievement. Actually, Dr. Pauling noted in No More War, the cost was $600, and that from his own purse. On January 13, 1958, eight months after this first appeal, Linus and Ava Helen Pauling in person presented the petition to United Nations Secretary-General Dag Hammarskjold in New York. By that day the total number of signatures was 11,021. 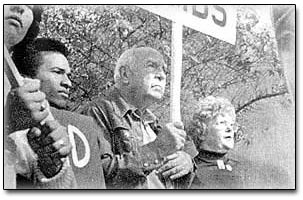 Many of us in Los Angeles remember the marches and demonstrations for peace led by the Paulings, in which many local Unitarians walked with vast pride.

Those of us who were members of First Church during the “dreadful fifties,” when advocacy of peace and nuclear disarmament was both necessary and hazardous, remember gratefully that Linus Pauling never declined a request to speak at our church, however busy he was. His presence invariably filled the church. Ava Helen, of course, was equally generous, and gave us needed courage with first-hand news of the growing peace forces around the world.

There are some subjects most of us bypass in honoring these two cherished members of our church. We do not go into detail about the structure of crystals, the nature of the chemical bond, and the structure of molecules. We do not find ourselves explaining the Pauling resonance theory of chemical valence, or the construction of the first model of a benzine molecule, the brilliant scientific breakthrough which won him a Nobel Laureate in chemistry. 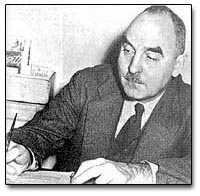 With great respect, we Unitarians and our friends can honor a citizen-scientist even if we are without his unique genius and have not shared his explorations of what goes on within the atom or far away in the stellar universe. Many of us can understand the harassment he endured from the passport division of the State Department, which sought to keep him locked within his own land even when the British Royal Society asked him to lecture in London on the structure of proteins. Dr. Pauling managed to open the lock with the golden key of a Nobel Laureate (as Cedric Belfrage so well phrased it) and, with an invitation to Oslo, received the prize from the King of Sweden.

Linus Pauling taught many of us how to stand firm before inquisitorial committees of the state and federal thought police. It is pleasant to recall his statement to a committee in Washington, which wanted to be reassured one more time that he was not part of a sinister organization exercising thought control. In refusing to repeat his denial, Linus finally declared: “Nobody tells me what to think except Mrs. Pauling.”

Ava Helen and Linus have helped us at the First Unitarian Church of Los Angeles and many others in this catastrophic era to escape this oppression, a deliverance for which, above all, we welcome them tonight. It is also true that we love you deeply and wish you long life and happiness and as many more Nobel prizes as you both want.

Stephen H. Fritchman: To All Who Toil