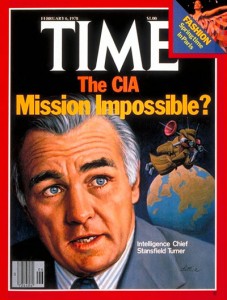 Stansfield Turner was born in Highland Park, Illinois, on December 1, 1923. He entered Amherst College in 1941 and graduated from the United States Naval Academy in 1946. After obtaining a Rhodes scholarship, he studied philosophy, politics, and economics at Oxford University.

During his service in the United States Navy, Turner commanded a mine sweeper, a destroyer, a guided-missile cruiser, a carrier task group and a fleet. He also was President of the Naval War College. Admiral Stansfield Turner’s last naval assignment was as Commander in Chief of NATO’s Southern Flank.

In 1977 President Jimmy Carter appointed Turner as Director of the Central Intelligence Agency. He served in the post until January 1981. In recent years he has worked as a lecturer, writer and TV commentator and is a director of several American corporations.

Books by Turner include Secrecy and Democracy: The CIA Transition (1985), Terrorism and Democracy (1991), Caging the Nuclear Genie: An American Challenge for Global Security (1997) and Spy Stories (2003).

—From The National Archives