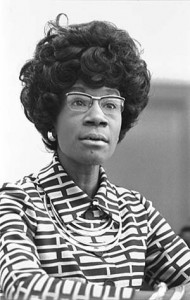 Shirley Anita St. Hill Chisholm (November 30, 1924–January 1, 2005) was an American politician, educator and author. She was a Congresswoman, representing New York’s 12th District, for seven terms from 1969–1983. In 1968, she became the first African-American woman elected to Congress. In January 23, 1972, she became the first African-American and the first woman to make a serious bid to be President of the United States.

As a freshman, Chisholm was assigned to the House Forestry Committee. Given her district, she felt the placement was a waste of time and shocked many by demanding reassignment. She was placed on the Veterans’ Affairs Committee. Soon after, she voted for Hale Boggs as Majority Leader over John Conyers, even though Boggs was white. As a reward for her support, Boggs assigned her to the much-prized Education and Labor Committee; she was the third-highest ranking member when she retired.

Chisholm joined the Congressional Black Caucus in 1969 as one of its founding members. In 1972, Chisholm made a bid for the Democratic Party’s presidential nomination, and received 152 delegate votes, but ultimately lost the nomination to South Dakota Senator George McGovern. Chisholm’s base of support was ethnically diverse and included the National Organization for Women. Among the volunteers who were inspired by her campaign was Barbara Lee, who would go on to become a congresswoman some 25 years later. Chisholm said she ran for office “in spite of homeless odds,” “to demonstrate the sheer will and refusal to accept the status quo.”

Throughout her tenure in Congress, Chisholm would work to improve opportunities for inner-city residents. She was a vocal opponent of the draft and supported spending increases for education, healthcare and other social services, and reductions in military spending. She announced her retirement from Congress in 1982. Chisholm was named to the Purington Chair at Mount Holyoke College in South Hadley, Massachusetts.

In 1993, she was inducted into the National Women’s Hall of Fame. Chisholm also authored two books, Unbought and Unbossed (1970) and The Good Fight (1973).

Click here for supplemental reading about Shirley Chisholm on Amazon.