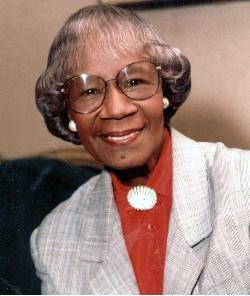 Shirley St. Hill Chisholm was born on November 30, 1924, in Brooklyn, New York to Charles and Ruby St. Hill. Her father was from British Guiana and her mother was from Barbados. In 1927, Shirley was sent to Barbados to live with her maternal grandmother. She received a good education from the British school system, which she later credited with providing her with a strong academic background.

In 1934, she rejoined her parents in New York. Shirley excelled in academics at Girls High School in Brooklyn, from which she graduated in 1942. After graduation she enrolled in Brooklyn College, where she majored in sociology. Shirley encountered racism at Brooklyn College and fought against it. When the black students at Brooklyn College were denied admittance to a social club, Shirley formed an alternative one. She graduated in 1946 with honors. During this time, it was difficult for black college graduates to obtain employment commensurate to their education. After being rejected by many companies, she obtained a job at the Mt. Calvary Childcare Center in Harlem.

In 1949, she married Conrad Chisholm, a Jamaican who worked as a private investigator. Shirley and her husband participated in local politics, helping form the Bedford-Stuyvesant Political League. In addition to participating in politics, Chisholm worked in the field of day care until 1959. In 1960, she started the Unity Democratic Club. The Unity Club was instrumental in mobilizing black and Hispanic voters.

In 1964 Chisholm ran for a state assembly seat. She won and served in the New York General Assembly from 1964 to 1968. During her tenure in the legislature, she proposed a bill to provide state aid to day-care centers and voted to increase funding to schools on a per-pupil basis. In 1968, after finishing her term in the legislature, Chisholm campaigned to represent New York’s Twelfth Congressional District. Her campaign slogan was “Fighting Shirley Chisholm—Unbought and Unbossed.” She won the election and became the first African-American woman elected to Congress.

During her first term in Congress, Chisholm hired an all-female staff and spoke out for civil rights, women’s rights, the poor and against the Vietnam War. In 1970, she was elected to a second term. She was a sought-after public speaker and cofounder of the National Organization for Women (NOW). She remarked that, “Women in this country must become revolutionaries. We must refuse to accept the old, the traditional roles and stereotypes.”

The 1972 Democratic National Convention in Miami was the first major convention in which any woman was considered for the presidential nomination. Although she did not win the nomination, she received 151 of the delegates’ votes. She continued to serve in the House of Representatives until 1982. Shirley Chisholm passed away on January 1, 2005.