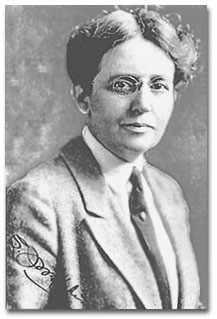 In the late 1800s and early 1900s, infectious diseases were a major concern of both physicians and researchers. In larger cities such as New York and Boston, sanitation was poor. The rotting bodies of dead horses lay in the streets and unpasteurized milk was sold from rusty, open cans. Dysentery, smallpox, and typhoid were major health problems. Although we are often unfamiliar with these diseases today, they caused horrible suffering. Dysentery caused severe diarrhea and loss of fluids. The bodies of smallpox victims were covered in painful sores. Typhoid resulted in high fever, delirium, and intense headaches. These diseases were especially common and deadly among young children. In New York City, one-third of all deaths were among infants less than one year old. In New York’s Hell’s Kitchen 1,500 infants died each week during the summer of 1902, primarily due to dysentery.

During the same period, preventative medicine was almost unknown. It was only when a person became ill that medical treatment was sought. There were no public health nurses and few large-scale public health programs or policies. It was also a time of social change. Women were marching in the streets to gain the right to vote. Certainly, female physicians were a rarity at this time; they accounted for less than 1% of all physicians. Few medical schools were open to women; it was very different from today when nearly 39.2% of medical school graduates are women.

Josephine Baker did not intend to become a physician. At the age of 16, she was preparing for studies at Vassar by attending Misses Thomas’ School for Young Ladies in Poughkeepsie, New York, when her father died of typhoid fever. In order to support her mother and family, she decided to study medicine instead. She knew of only one school that would accept women: the Women’s Medical College of the New York Infirmary for Women and Children, founded by Drs. Elizabeth and Emily Blackwell. She was the next to the last class at the college; Emily Blackwell closed the school the following year because Cornell University had opened its medical college to women the same year.

After finishing medical school, Josephine Baker interned at the New England Hospital for Women and Children in Boston and also worked at an out-clinic in one of Boston’s worst slums. There she learned how poorly medical science was serving the crowded city populations.

Working at the Department of Health in New York 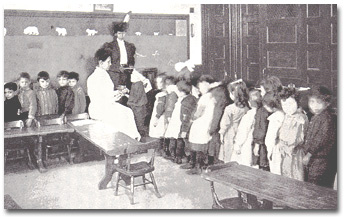 At the turn of the century, Dr. Baker began her life’s work with the New York Department of Health as a medical inspector. Her first job was to examine children in a public school; she was allotted one hour for every three schools and could send home any child who was sick. Unfortunately, the truant officers were just as likely to send the sick child straight back to school. Her work in the schools led to the establishment of a city-wide school nurse program. The program worked so well that cases of head lice and the eye infection trachoma‚—once extremely prevalent in the schools‚—dropped to nearly zero.

Josephine Baker helped to establish some of the first programs in preventative medicine and public health. In order to curb the enormous death rates among infants in the city, Dr. Baker used school nurses in the summer of 1908 to visit the homes of newborns to teach mothers how to take care of their babies. There were 1,200 fewer deaths that summer than the previous one (O’Hern, 1985). Soon after, the Division of Child Hygiene (later the Bureau of Child Health) was established and Josephine Baker was appointed its chief. Her other accomplishments include:

-a long and successful battle to allow midwives to be licensed by the city;

-the development of a foolproof dispenser for administering silver nitrate to newborns’ eyes to prevent gonococcal infections and subsequent blindness;

-the development of a newborn formula by adding water, calcium carbonate, and lactose to cow’s milk; and

-the controversial development of the Little Mothers Leagues where eight- to nine-year-old girls were taught how to take care of younger children while their mothers were working to earn a living to support the children. Many protested that the Leagues were “enslaving the young girls so their mothers could be irresponsible, go to the movies, or get drunk.”

In 1894, just before entering medical college.

It is difficult to realize today how innovative and radical these programs were. In testimony before a Congressional committee, one physician opposed Baker’s Little Mothers Leagues, stating, “If we’re going to save the lives of all the women and children at public expense, what incentive will there be for a young man to go into medicine?” (O’Hern, 1985, p. 27). When the Bureau of Child Hygiene was formed, a petition was signed by more than 30 Brooklyn physicians and sent to the mayor demanding that the bureau be abolished because “it was ruining medical practice by its results in keeping babies well” (p. 27). Dr. Baker told the mayor that the letter was a compliment to the Bureau. There was no doubt that some social norms were about to change!

One of Josephine Baker’s most famous professional tasks was tracking down Mary Mallon (“Typhoid Mary”) in 1907. The way Ms. Mallon’s case was handled raises some interesting questions even today about conflicts between personal rights and public health:

George Soper at the Department of Health Laboratories had investigated seven family epidemics of typhoid going back to 1900. He found that they were all linked to the cook [Mary Mallon] in each family. Baker was sent to collect specimens for culture. On her first visit, Baker had the door slammed in her face. The next day, when she returned with several policemen, Mary answered the door and again tried to slam it shut, but a policeman’s foot was in the door. Mary ran into the house and could not be found in a search of the house. But looking out the rear window, Dr. Baker noticed a chair against the fence and footprints in the snow. Mary was found next door hiding in a closet. She was most uncooperative and fought against having blood taken so she was forcibly transported in an ambulance to a hospital where specimens were obtained. The blood and urine culture were negative but the stool culture was teeming with typhoid bacilli. Captured on March 20, 1907, Mary Mallon was confined to Willard Parker Hospital for two years and 11 months during which every available remedy was tried to rid her of the typhoid organisms. All efforts failed. On the promise that she would return every three months to the laboratory and take up some occupation other than cooking, Mary was released. She promptly disappeared and it was more than five years later when her trail was picked up, once more through epidemiology. She made no struggle against the second capture. This time she was sent to North Brother Island where she remained for 23 years, to the end of her life in 1938, a special guest of New York City.

Josephine Baker’s success in reducing infant sickness and mortality obviously created some enemies for her. Not surprisingly, some resented the fact that a female physician was in charge of a city bureau, and, in 1919, there was considerable pressure to remove her from her position. However, she received great public support from the local press and from mothers who marched to the mayor’s office to protest her possible dismissal. When she was first appointed director of the division, the six physicians who had been her peers as medical inspectors “all resigned because of the disgrace of working for a woman. She persuaded them to try it for a month” (O’Hern, 1985, p. 28). All six stayed permanently.

Perhaps the most discouraging discrimination she faced was from the students she taught at the New York University who were studying for the Doctor of Public Health degree: 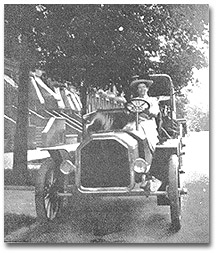 I stood down in a well with tiers of seats rising all around me…and the seats were filled with unruly, impatient, hard-boiled young men. I looked them over and opened my mouth to begin the lecture. Instantly, before a syllable could be heard, they began to clap thunderously, deafeningly, grinning, and pounding their palms together .

Dr. Baker roared with laughter to save face but, at the end of the lecture, the clapping began again. She endured this clapping for each of her lectures for fifteen years!

Interestingly, she was also a suffragette, that is, a person who wanted women to have the right to vote in elections. She was one of 500 who marched in the first suffrage parade on Fifth Avenue and met with President Woodrow Wilson at the White House along with a group supporting women’s suffrage. Finally, she served as an officer, consultant, or board member for a number of professional associations, most notably as president of the American Child Hygiene Association and president of the American Medical Women’s Association. She published five books and over 200 articles during her professional career. In 1939, her autobiography, Fighting for Life, was published.

A Child Care Revolution Begins
from Chapter One of Fighting for Life, the autobiography of Sara Josephine Baker

My impulse to try to do things about hopeless situations appears to have cropped out first when I was about six years old, and it should be pointed out that the method I used was characteristically direct. I was all dressed up for some great occasion‚—a beautiful white lacy dress with a blue sash and light blue silk stockings and light blue kid shoes‚—and inordinately vain about it. While waiting for Mother to come down, I wandered out in front of the house to sit on the horse block and admire myself and hope that someone would come along and see me in all my glory.

Presently a spectator did arrive‚—a little colored girl about my size but thin and peaked and hungry looking, wearing only a ragged old dress the color of ashes. I have never seen such dumb envy in any human being’s face before or since. Child that I was, I could not stand it; it struck me right over the heart. I could not bear the idea that I had so much and she had so little. So I got down off the horse block and took off every stitch I had on, right down to the blue shoes that were the joy of my infantile heart and gave everything, underwear and all, to the little black girl. I watched her as she scampered away, absolutely choked with bliss. Then I walked back into the house, completely naked, wondering why I had done it and how to explain my inexplicable conduct. Oddly enough both Father and Mother seemed to understand pretty well what had gone on in my mind. They were fine people, my father and mother.

Dr. Baker was for many years a Unitarian.