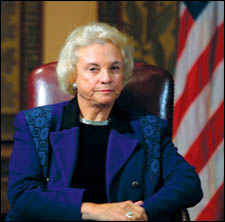 Sandra Day (O’Connor) was born on March 26, 1930, in El Paso, Texas. She spent her early childhood on the Day family’s 198,000-acre cattle ranch. When she reached school age her parents sent her back to El Paso to live with her grandmother.

Sandra Day attended Stanford University, where she received her B.A. in economics in 1950. She continued at Stanford for her law degree, graduating in two years rather than the customary three, and graduating third out of a class of 102. It was during her work as editor on the Stanford Law Review that she met John Jay O’Connor III. Soon after graduation they were married.

O’Connor served as an Arizona assistant attorney genera from 1965 to 1969, when she was appointed to a vacancy in the Arizona Senate. In 1974, she ran successfully for trial judge, a position she held until she was appointed to the Arizona Court of Appeals in 1979. Eighteen months later, on July 7, 1981, President Ronald Reagan nominated her to the Supreme Court. In September 1981, Sandra Day O’Connor became the Court’s 102nd justice and its first female member.

O’Connor currently serves as Chancellor of the College of William and Mary, on the board of trustees of the Rockefeller Foundation, the executive board of the Central European and Eurasian Law Initiative, and the American Bar Association Museum of Law board of directors. Between March and December of 2006, Justice O’Connor served her country as a member of the bipartisan Iraq Study Group of the United States Institute of Peace.

Lazy B by Sandra Day O’Connor