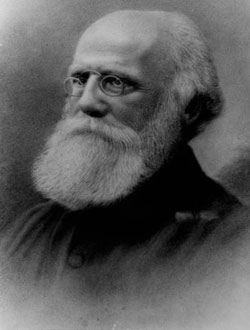 Samuel R. Calthrop was one of the most unique and vital personalities in the Unitarian Fellowship during the latter half of the nineteenth and the first years of the twentieth centuries. He was born on October 9, 1829, at Swineshead Abbey, Lincolnshire, the family home of the Calthrops for many generations. He came of sturdy English stock, and was nurtured amid all that is finest and best in English rural life.

He received his early education at home, chiefly under the guidance of his elder sister Elizabeth, of whom he always spoke with loving gratitude. “I was about eight years old when I began Latin,” he wrote; and from that time his mind was steeped in classic literature. It became as familiar to him as his native tongue. When he was nine years old he entered St. Paul’s School, London, and there his gift for thorough scholarship had a broad and deep foundation. He was a natural-born student and took high rank, becoming at last “Captain” of the school, a position of honor and responsibility. Yet with it all he was no mere grind. He was as good on the playing fields as in the classroom. Once, with indignant fists, he taught a salutary lesson to the bully of the school. He was always an expert boxer and once in his old age knocked down an insolent fellow on the city street.

At nineteen he entered Trinity College, Cambridge, as “Pauline Exhibitioner.” He had early in life felt the call to preach, and he hoped to prepare himself for the ministry of the Church of England. But this was not to be. He completed the five years’ course in Trinity College with honors and prizes; but refused to graduate. At that time no degrees were given at Cambridge unless the recipient signed the Thirty-nine Articles of the Church of England. He could not conscientiously sign them, and gave up his cherished ambition. Of this incident he said later in life, “It seems hardly possible that such folly could have been in full power within the span of one man’s life when contrasted with the freedom of today. Sometimes I think I will go back and get my degree.” Then came the crisis of his spiritual life. “When I was twenty-two,” he wrote, “I went through a very searching religious experience. It was no sense of my own sin that led to this. It was a deep sense of the exceeding sinfulness of a bad God.” He won his way out of that darkness into the light of the Unitarian faith. It brought him peace and a great assurance. Henceforth his faith never wavered. But he was alone. “My little church had only one member, myself.”

He came to America in 1853, landing in New York. While he was in the very act of delivering a letter of introduction to a family friend there, word was received that a church in the town of Southold, Long Island, was without a preacher for the next Sunday. Would he go? He most certainly would. He preached in Southold the following Sunday, and the church asked him to remain. He agreed to do so for a while, on the one condition that the church pay his board, three dollars a week. He preached in Southold for three months. “And that,” he was wont to say, “was the cheapest preaching that ever was preached.”

Obviously preaching was to be his vocation. He must tell the good news of the love of God manifested throughout the universe. But he felt that he could not preach effectively to Americans until he knew them better. And it seemed to him that the best way to understand “big” Americans, as he called them, was to understand “little” Americans. Many parents had already noted his unusual gifts as a teacher, and at their solicitation, and in order to know Americans better, he opened a boys’ school at Bridgeport, Connecticut. He understood boys. He lived with them, shared their sports and their enthusiasms, refereed their fights, gave them of his rare scholarship, and nurtured their finest ambitions. Many a man who has made his mark in American life got his unforgettable training and inspiration in that unique school in Bridgeport.

In 1857 he married Elizabeth Primrose, whom he had met in Canada, and who, for more than fifty years, was his loyal and loving companion and helpmeet. Three daughters and two sons were added to a cheerful and hospitable family circle.

After teaching American boys for six years, he felt that he was prepared to gratify his ambition to preach to American men and women. He was ordained to the Unitarian ministry in 1860; and accepted a call to the church in Marblehead, Massachusetts In 1868 he was called to succeed Samuel J. May in the Unitarian Church of Syracuse, New York. He was installed on April 29, 1868; and for forty-three years was the active minister of the church.

It was the time of the bitter theological controversies following on the publication of Darwin’s Origin of Species and Descent of Man. Dr. Calthrop was a leader among the Unitarian ministers who accepted the newly discovered truth gladly; and showed that so far from destroying religion it deepened and broadened religion and gave it firmer foundations. It was intimated to him that it would be expedient if he did not lay so much stress on this new theory of evolution. But he declared that he must speak the truth as God gave it him to speak.

Technically he was minister of May Memorial Church, but actually the whole community was his parish. He became an institution of the city. In his old age he was known as “The Grand Old Man of Syracuse.” His home on Primrose Hill, named after his beloved wife, and overlooking the beautiful valley of the Onondaga, became the intellectual and spiritual center of the city. It was a home of generous, open-hearted hospitality. There the children and young folks loved to go and play all sorts of games with him, who was always young. And there he would give freely to groups of eager listeners of his wisdom and his knowledge of men and things, brightened by touches of kindly humor and flashes of sparkling wit.

All the interests of the city were his interests. He organized and fostered the Syracuse Boys’ Club, now housed in a splendid building, fit monument to his love for boys. He was instrumental in establishing the first playgrounds of the city. In 1900 Syracuse University conferred on him the degree of L.H.D. On January 1, 1911, he became pastor emeritus of the church; and on May 11, 1917, he quietly died. Many of his sermons and articles on religious and scientific subjects were published during his life; and he wrote three books of enduring value: God and His World, The Supreme Reality, and a little volume of poems revealing his love for nature and the beauty of his religious faith.

Dr. Calthrop was an impressive figure of a man, over six feet tall, broad-shouldered and with vigor written in every line of his figure. He wore a square-cut beard and had a mass of curly hair. His keen eyes twinkled behind gold-rimmed glasses. He was amazingly many-sided. Nothing of human concern was foreign to him. His fund of general information was inexhaustible, and there was nothing about which he had not some interesting and stimulating comment. He was a great preacher and, perhaps, even a greater teacher. He was a profound classical scholar and a scientist deeply versed in geology, botany and astronomy. He needed no text when teaching Homer and Virgil for he knew almost all of The Iliad and The Aeneid by heart. For years he was the chess champion of the State of New York, the sort of player who could be blindfolded and then successfully carry on half a dozen games at one time. He was a skillful player of whist and billiards and all his life a master at tennis. He once coached a discouraged crew to victory and many were the stories told of his prowess as a fisherman. Though a very outspoken Unitarian, he was welcome in all churches and in many college pulpits. At a Catholic fair he was voted the most popular man in the city, and when the Jews had some special celebration, it was to Calthrop they turned for a speaker.

All of these manifold abilities and interests found their focus, however, in his passion to “preach the truth as God gives it to me to preach” and in his determination to practice the presence of God.

This sketch was contributed by Dr. Calthrop’s successor at Syracuse, the Rev. John H. Applebee, supplemented from the reminiscences of one of his grateful pupils, Dr. William Sydney Thayer.