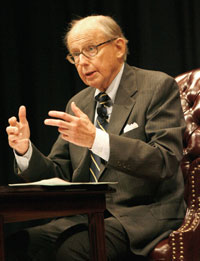 Samuel P. Huntington is the U.S. author of the Trilateral Commission report, The Crisis of Democracy. He is a member of the Advisory Board of America Abroad Media. In addition to his being the Director of the John M. Olin Institute for Strategic Studies at Harvard University, he is Albert J. Weatherhead III University Professor and Chairman of the Harvard Academy for International and Area Studies.

Professor Huntington is the author or editor of over a dozen books and ninety scholarly articles. His book, The Clash of Civilizations and Remaking of World Order (1996) has been translated into 31 languages.

His other works include The Soldier and the State: The Theory and Politics of Civil-Military Relations (1957), Political Order in Changing Societies (1968), and The Third Wave: Democratization in the Late Twentieth Century (1991) (winner of the Grawemeyer Award for Ideas Improving World Order).

In 1977/78, Professor Huntington served at the White House as Coordinator of Security Planning for the National Security Council. He was also the founder and co-editor of the quarterly journal, Foreign Policy.

Huntington received his B.A. from Yale University, his M.A. from the University of Chicago, and his Ph.D. from Harvard in 1951.

His book Who Are We? The Challenges to America’s National Identity is a new intensely discussed work.