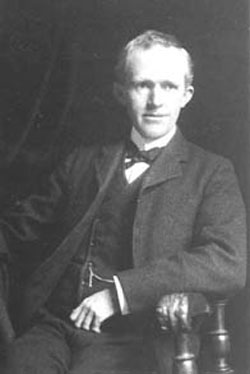 Samuel McChord Crothers was born in Oswego, Illinois, on June 7, 1857, and died in Cambridge, Massachusetts, on November 9, 1927. He came of vigorous Scottish Presbyterian stock, from Northern Ireland; and his mind was never more alert and active than when it was exploring areas of thought where his spiritual heritage might find expression in new and fruitful forms. One of his grandfathers, Dr. Samuel Crothers, founded in 1808 one of the first Presbyterian churches in the Territory of Illinois; and another of his kin, Dr. James McChord, the first president of Center College in Kentucky, taught a doctrine of mental and religious unfolding and expansion that anticipated by many years the discoveries and teachings of evolution.

After graduating at the age of sixteen from Wittenberg College, Springfield, Ohio, Crothers went for a year of further study to Princeton where in 1874 he received his A.B. degree—the youngest student to be graduated from Princeton College up to that time, with the single exception of Aaron Burr. He spent the next three years at Union Theological Seminary from which he graduated in 1877, and in that same year was ordained to the Presbyterian ministry in Springfield, Ohio. He served for two years in a mission field in Nevada, at Eureka and Gold Hill; and then, in 1879, went to the Presbyterian church in Santa Barbara, California, where, in 1882, he married Louise M. Bronson. Rarely has a minister found so perfect a helpmeet.

The ministry in Santa Barbara was happy in its development of his power as a preacher and a parish minister, but it was also a period of revolutionary experience for the young minister. Neither he nor his people knew what was happening, for there were no sharp breaks in his thinking and no conflicts within his soul. When finally challenged with the fact that he was no longer preaching sound Presbyterian doctrine, he replied, probably with the same gentle playfulness that marked his whole life, that he was preaching, not the doctrines peculiar to Presbyterianism but the doctrines wherein Presbyterianism was in accord with Christianity. When he discovered that he had really become a Unitarian, he quietly withdrew and his people let him go with affectionate but understanding reluctance. It remained one of the finest traits of his mind and temper that this transition left in him no sense of resentment or revolt. The essential faith of his fathers remained dear to him, and the fundamental truths of the Westminster Catechism, detached from their metaphysical elaborations, were repeatedly the theme of his Unitarian sermons. To an extraordinary degree he combined the moral passion and sinewy intellectual fiber of Calvinism with the adventurous spirit of the prophet and pioneer.

As a Unitarian minister, Mr. Crothers served for four years (1882–1886) in Brattleboro, Vermont, seven (1886–1894) in Saint Paul, Minnesota, and thirty-three (1894–1927) in Cambridge, Massachusetts; up to the very end, his ministry was an uninterrupted growth in spiritual power. His sermons and his prayers brought encouragement and healing to an unnumbered multitude. Never stooping to the adroit arts of the “popular” preacher, never tempering his moral judgments to the prejudices of his hearers, he preached without partiality and without hypocrisy; but it was the preaching of a spacious mind always at home in God’s great house, always eager to share with others the happy and surprising discoveries of new light and truth.

His ministry, however, was not restricted to the Sunday services and the pastoral relations of his successive churches. He became widely known as a lecturer, and his many trips across the continent gave him not only a national reputation but also an extraordinary breadth of vision and insight. In particular, he was in constant demand as a preacher at colleges and universities—for lectures on literary and historical subjects, or for the sheer delight of the gentle humor that played revealingly upon contemporary events and tendencies. He was always the interpreter, the reconciler, the friend alike of the humble and the great, and the encourager of youth. Young people turned to Dr. Crothers as a teacher who knew how to bring his wisdom to their capacity without a touch of superiority in tone of voice or turn of phrase. They knew that they could count upon his sympathy, his keen criticism of some of their revolutionary ideas, his faith in their ability to make their lives count.

Dr. Crothers early won fame as an author. His delightful essays were marked by penetrating insight, discriminating comment on current events, homely common sense and quiet humor. Sweetness and light streamed from him because they were in him. He was sometimes described as another Charles Lamb or Oliver Wendell Holmes, but the kinship was closer with Emerson. He was not a rebuker of sinners; he was not an orator for the masses; he was not given to denunciation or even to exhortation. Dr. Peabody said:

His mind dwelt in the higher regions of thought and character. He was the friend and helper of those who would walk in the spirit and even if they could not rise up with him as eagles, they were taught at least how to run and not be weary, how to walk and not faint.

Dr. Crothers was so temperamentally shy and so modest and so almost aloof in social relations that people were sometimes blind to the fact that he was one of the shrewdest observers of practical concerns and occurrences. That endowment was not indeed derived from much contact with worldly affairs but rather from observation of such affairs and experiences with the detachment of a seer. It was “the wisdom which is from above”—direct, discerning, penetrating. Doubtless his exceptional capacity to see the humorous side of things was no small element both in his judgment of people and events. He had a detective eye for humbug and could pierce pretension or pedantry with a rapier thrust of wit. But it was a wit that charmed more often than it wounded. One never saw a spark of malice in his eye or heard a word of envy from his lips. He never seemed to be in a hurry and never showed signs of being anxious or depressed.

Recognition came to him in generous measure. He received the honorary degree of D.D. from Harvard in 1899, and of Litt.D. from St. Lawrence in 1904, from Princeton in 1909, and from Western Reserve in 1923. When Theodore Roosevelt came to Cambridge as President of the United States, to celebrate the twenty-fifth anniversary of his graduation, it was the minister of the First Parish Church whom he invited to be his single guest at breakfast—to the consternation of the “important people” who couldn’t quite see why the author of The Gentle Reader should have been chosen for this honor by the evangelist of The Strenuous Life. But it was characteristic of both men, and the table talk that morning must have been worthwhile.

While never in the least arrogant or arbitrary and always open-minded, Dr. Crothers had the complete courage of his own convictions. He was therefore a remarkable convincing advocate of many good enterprises and equally fearless defender of unpopular causes. Nothing helps a cause more effectively than to find it consistent with such gentleness, sanity and interpretive good will.

Here was a man who “practiced the presence of God” in the affairs and among the needs of men. A glad, free spirit of joy touched all his writings with a buoyant optimism, threw its light on the darkest clouds of experience, and undergirded all his doings with fearlessness and serenity.

— The writer of this memoir was at one time Dr. Crothers’s associate in the charge of the First Parish in Cambridge. To his manuscript the editor, who was Dr. Crothers’s parishioner for twenty-seven years, has added some sentences from his own commemorative address and some quotations from the memorial address of Dr. Francis G. Peabody.

The Church in Harvard Square: For an Industrial Society