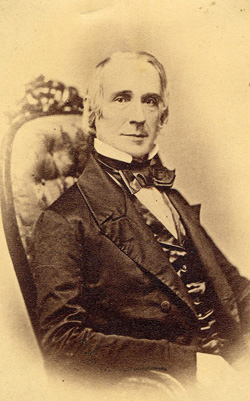 Samuel Gilman came of an ancient Welsh family that had lived in Norfolk County, England, for generations. He was descended from John Gilman, who arrived in Boston in 1638, but eventually removed to Exeter, N.H., where he was made royal councilor. In 1786 Frederick Gilman, of Exeter, married Abigail Hillier Somes, of Gloucester, Mass. Samuel was born at Gloucester, February 16, 1791. He entered Harvard College, and graduated in 1811.

The future minister did not at once enter upon his life-work, but began to teach in Boston, where he was found in 1815, at the close of the war with Great Britain. He had been absent from his school, and was one day slowly going back by stage, when the driver, as they passed along, noticed several flags flying in different parts of the town of Chelsea. As they approached the toll-gate, a man rushed out, handing the passengers a paper, crying at the same time, “Read that! Read that!” A “Postscript” was then read aloud, giving the information that peace had been declared—an announcement that was received with “applause and clapping of hands that made the carriage shake to its axletree.” The party drove full gallop into Boston, “amidst the ringing of bells, the roaring of cannon, and the running together of multitudes.” Mr. Gilman hastened to his schoolroom, and announced a holiday, which was hailed with as much enthusiasm by the boys as the news had been welcomed by their elders.

School-teaching was not the only extra-professional employment of the young graduate. From 1817 to 1819 he was tutor in mathematics in Harvard College; but all the time he appears to have been getting nearer to the work that was to engross his maturer years. In January, 1817, we find him making “a fatiguing journey from Cambridge” to West Boylston, near Worcester, by stage, for the purpose of standing as “candidate” for a charge. He boarded in the latter place “with a rich, jolly farmer,” who had a “good-natured wife and three comely daughters,” who welcomed him “with a good can of rum sling, taking especial care to drink first”—a custom that, he said, was very common in New England; and he was followed by his wife, who wished Mr. Gilman good health, after which she sipped “with true feminine delicacy.” The daughters all declined, “though the mother urged them to drink a little, as they had been hard at work.” Mr. Gilman did not like the accommodations afforded to candidates at West Boylston, where the blankets were so thin that he shivered the long, cold nights, where tongs were his snuffers, where he was expected to perform his toilet with the help of a small skillet over the kitchen sink, and where he found many other things shocking to his sensibilities, as he wrote, probably in confidence, to Miss Caroline Howard, the Boston girl of twenty-three, whom he was soon to marry.

By the year 1819 school-teaching and candidating were things of the past for Samuel Gilman. In that year Miss Howard became Mrs. Gilman, and he himself was ordained pastor of the Archdale Unitarian Church in Charleston, S.C. This church had begun in 1772, as the “Independent Church,” and had had but three pastors when Mr. Gilman took charge of it. Here he entered into the work of the Rev. Anthony Forster, a young minister of liberal gifts and tendencies, who had just died. He commended himself not only to the members of his own congregation, but to the community as well, and he was honored and esteemed highly by every one in Charleston. Mr. Gilman was firm in his adherence to “that blessed poise of Unitarian Christianity, through which the directest line is drawn from earth to heaven,” as he expressed it in a sermon preached at the dedication of the Unitarian church in Augusta, Georgia, in 1827. His sermons were not oratorical efforts, but simple and practical presentations of principles.

While always giving his best efforts to his ministerial duties, Mr. Gilman did not neglect his fine literary faculty, and wrote poems, translations, and essays, which were made public in the Southern Quarterly Review, the Christian Examiner, and the North American Review. On the occasion of his graduation, in 1811, he delivered the Commencement poem, and forty-one years later, in 1852, when his class was invited to gather at the house of Edward Everett, one of its members, in Boston, he read another poem, which he called a “Sequel” to the first. In 1815 he delivered the Phi Beta Kappa poem at Harvard College, which was entitled “Human Life.” Two of Mr. Gilman’s poetical writings have lived in general memory. The first is a “Union Ode,” composed for the Union party of South Carolina, and sung there July 4, 1831, during the Nullification excitement. It was revived during the Civil War, and was sung with effect at Union meetings in the North. The second is “Fair Harvard,” written in response to a demand for a song appropriate to the two hundredth anniversary of the college, and sung for the first time September 8, 1836. It is sung at every Commencement still. It was written in the house of Judge Fay, now belonging to Radcliffe College, in Cambridge, where Dr. Gilman was visiting when the call for a poem was unexpectedly made upon him. Judge Fay had married a sister of Mrs. Gilman.

Harvard College honored Mr. Gilman by conferring on him the degree of Doctor of Divinity. He died at the residence of a son-in-law, the Rev. Charles J. Bowen, at Kingston, Mass., February 9, 1858, leaving a widow and four daughters. Mrs. Gilman, whose well-known contributions to literature in prose and verse cannot be mentioned here, died in the city of Washington, September 18, 1888, within a few days of the dose of her ninety-fourth year.