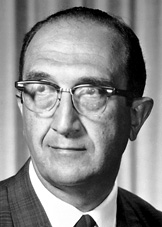 Salvador Edward Luria, the Nobel Prize in Physiology or Medicine in 1969, was born on August 13th, 1912, in Torino, Italy. He has been a naturalized citizen of the United States since January 1947.

In 1929 he started his studies in Medicine at the University of Torino, where he obtained his M.D. summa cum laude in 1935. From 1938 to 1940 he was Research Fellow at the Institute of Radium in Paris; 1940-42, Research Assistant in Surgical Bacteriology at Columbia University; from 1943 to 1950 he was Instructor, Assistant Professor, and Associate Professor of Bacteriology at Indiana University. In 1950 he was appointed Professor of Microbiology at the University of Illinois; from 1959-1964 he was Professor of Microbiology at the Massachusetts Institute of Technology; in 1964 he became Sedgwick Professor of Biology at MIT, and in 1965, non-resident Fellow at the Salk Institute for Biological Studies. In 1970 Luria was appointed Institute Professor at the Department of Biology at MIT. He died in 1991.

—Courtesy of the Nobelprize.org

A Slot Machine, A Broken Test Tube: An Autobiography by Salvador Edward Luri