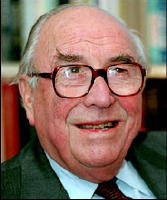 Roy Jenkins was a civilized, liberal, decent politician, for those who liked him. For harsher critics, he was a snob who had betrayed his party and his working-class roots. He had set out to be prime minister but his focus was never on politics alone. He was a rare creature among modern politicians, and a prolific and noted author and journalist. He was immersed in Labour politics from an early age. From the local grammar school, he went on to take a First at Balliol College, Oxford before entering Parliament just after the Second World War.

He made a name for himself as a radical home secretary. Abortion and homosexuality were legalized, divorce was made easier, and theater censorship was abolished. He became Chancellor of the Exchequer who tried to turn around Britain’s sickly economy. Roy Jenkins was a natural choice to be the first British President of the European Commission, where his term was primarily remembered for reviving the idea of European monetary union.

In later years, his books were popular and critical successes, and his biography of Gladstone brought him a coveted Whitbread Prize. Lord Jenkins enjoyed the high life: a devotee of fine wines and food, Harold Wilson once described him as “more of a socialite than a socialist.” He had numerous love affairs, most notably with Jackie Kennedy’s sister Lee Radziwill.

He was also Chancellor of the University of Oxford. Roy Jenkins was a private man, but he changed the shape of British society.