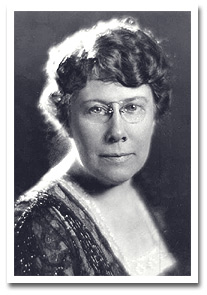 Rowena Morse Mann was a famous orator, scholar, and the first woman to receive a Ph.D. from the University of Jena, Germany. She was born in Ithaca, New York in 1870, the daughter of Sarah (Fitchette) and Benjamin Morse, and was extremely well-educated. She graduated from the University of Iowa in 1891 and taught science in the Omaha High School in Nebraska before deciding to prepare for the Unitarian ministry. She attended the Divinity School at the University of Chicago throughout the late 1890s. Winning a traveling scholarship for 1901 to 1904, Rowena traveled to Germany where the studied at the University of Berlin, only to discover the authorities would not grant a woman a degree. In 1904, after a hard struggle to gain recognition for her studies, she received a Ph.D. from the University of Jena. Hers was a test case, and when she graduated summa cum laude, the university changed its admissions policy to include women. A tablet was placed at the university in 1933, commemorating this event. 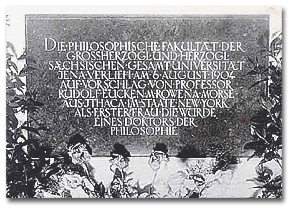 Upon her return from Europe, Rowena Morse preached one year in Geneva, Illinois and there was ordained to the Unitarian ministry March 29, 1906. She was minister for the Unitarian parishes in Keokuk, Iowa from 1906 to 1910, Kenosha, Wisconsin for one year, and the Third Unitarian Church in Chicago from 1911 to 1922. From 1914 to 1917 she served as a director of the Western Unitarian Conference. In the summer of 1921, she brought her pioneering spirit to Harvard University, conducting a service at Harvard Divinity School’s Andover Chapel. Anita Trueman Pickett, meeting Dr. Mann on this occasion, remembered her as “a delightful companion, humorous as well as inspiring.”

In 1912 she married the Rev. Newton Mann (1836-1926) of Omaha, Nebraska whom she had met while teaching in the Omaha High School early in her career. She had given a sermon one Sunday in the Unitarian church there, and soon afterwards she gave up her first teaching job to study for the ministry. Newton Mann’s first wife, Eliza J. (Smith), had died in 1908, leaving him to care for their son and daughter. 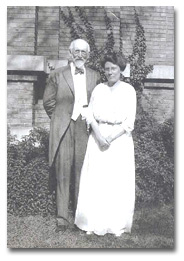 When her husband died in 1926, Rowena Morse Mann retired from the ministry and began lecturing extensively. Her scholarly and practical background, as well as her “informed, unbiased and vigorous” mind made her lectures on sociology, politics, ethics and art extremely interesting. In 1919 she was asked to fill out the commitments of Rev. Anna Howard Shaw, an ordained Protestant Methodist minister, who had contracted pneumonia and would die later that year. Thus Rowena Morse Mann became a lecturer for the Association for the League of Nations. With notable Americans such as ex-President William Howard Taft and A. Lawrence Lowell of Harvard University, she toured the country seeking to increase support for the League of Nations and President Woodrow Wilson’s planned peace treaty.

— By Catherine F. Hitchings. The above is an edited collation of biographical articles appearing in the 1975 and 1985 editions of Universalist and Unitarian Women Ministers (Universalist Historical Society).

The Education of Rowena Morse 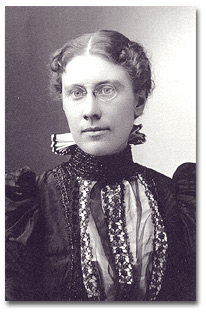 Since Rowena Mann wanted to resolve some of the problems that science had raised for religion and philosophy, she felt Chicago was the place to go. She entered the Divinity School at the University of Chicago in 1898. Feeling that one must study philosophy and theology together, she worked with Professors Dewey, George Meade, and George Burnham Foster.

Chief among her friends at the Divinity School was George B. Foster, whom she admired as “a great religionist, fighting under persecution,” which made him “one of the greatest theologians in his time.”

After two years in Chicago, Rowena received a traveling scholarship and journeyed to Germany for further study. It had been her wish to study at the Divinity School at Harvard. William Wallace Fenn, minister of the First Unitarian Society of Chicago, had been directing her program at Chicago as her Unitarian advisor. She explained that she wanted to study at Harvard. Of course she already knew that it was not their policy to admit women, but after all, it was now the “twentieth century.” W. W. Fenn wrote on her behalf to Dr. Everett, Dean of the Harvard Divinity School. In the letter (May 3, 1900), he highly recommended her, as Newton Mann had done when Morse came to Chicago, saying, “She has had the full equivalent of a college education, having studied at the University of Iowa…” Fenn explained that Miss Morse wished to “supplement the work done here by further study especially in Church History, Theology, and Comparative Religion.” He wondered if any arrangements could be made for her to have the special privilege of study at Harvard. Without questioning the policy of excluding women, Fenn wrote:

Of course, I know she can not be a candidate for a degree, but it seems to me that I have heard of one or two women who have been allowed to sit behind a screen in the synagogue while lectures were given. Is there a Court of Women in the Harvard Divinity School?

As for Dean Everett’s reply, it is apparently not among the records saved from that period, but it was clearly negative. Ironically enough, within months Fenn would be in a position to answer his own questions about women at Harvard Divinity School, for in that same year he succeeded Everett as Dean. Rowena Morse sought better opportunities in Germany. 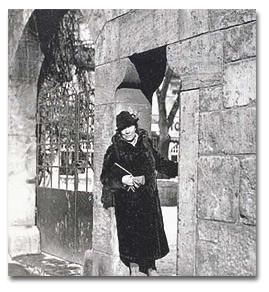 Rowena Morse at the University of Jena. Courtesy of the Schlesinger Library, Radcliffe Institute, Harvard University.

Morse spent vacations in St. Petersburg and in side trips around Germany. After more courses in the University of Leipzig, she went on to Jena. There, women had been admitted as auditors but denied access to examinations and degrees, in the same tradition of exclusion she had encountered at Harvard. She was no longer satisfied with the situation. She pressured her professor of constructive philosophy, Dr. Eucken, to find a way for her to become a degree candidate.

Rudolf Euchen smilingly said: “What are the philosophic bases of your deserving an education; and what should you say as to women’s obtaining a university education, in light of the fact that the university has never been open to them?”

It is significant that Rowena Morse argued her case both from a personal standpoint and to the end of admission for women in general. This put her in the position of performing not just as an aspiring doctoral student, but as a representative of women as well.

Rudolph Euchen was persuaded by her case to look for a way to alter the university policy. He took up the matter with officials and heads of departments at Jena, and with the prefect of education at Weimar. It went as a petition to the Ministry of Education of the German Empire. Morse was required to present all of her academic credentials for scrutiny.

In due time she was admitted as a candidate for the Ph.D. with certain provisional qualifications. She was to be a test case. If her degree “were taken in such a manner that it should [show] incontestable philosophical ability, and if the thesis were able and authoritative,” thenceforth the University would be open to all women who qualified for entrance, without regard to race or nationality. But under the circumstances, her exams would be thorough, covering four or five days. Her thesis would be read by the entire department. If accepted, it would be published by the University as a historical document. 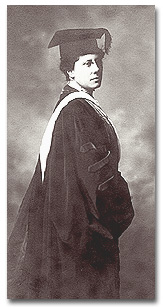 Rowena Morse responded to the pressure and the challenge. She took her oral examination after three years. She described the circumstances:

I entered the room and found sixty instructors and officials seated around a big table, with nothing to do but watch me, while four men gave the tests. On the table was a large bottle of wine and one glass. A professor asked if I would not like a little wine before starting. I replied, “I thank you—no—I am an American and do not drink wine.” They looked surprised and a little amused, then one said politely, “I will give you twenty minutes in which you may discuss as you please the various methods by which philosophical problems may be approached.” The test lasted five hours.

Rowena Morse was eager to get home. She sailed into Boston. The new Doctoris Philosophiae decided to stop in at Harvard to see the famous bust of James Russell Lowell. She was not allowed to see it. She protested and was told that the presence of a woman might be very disturbing to the young men who were studying.

Years later, while a student in the 1921 Harvard Summer School of Theology, Rowena was invited to preach in Andover Chapel. She was the first woman to preach in Harvard’s Divinity School, and in that sermon she took the opportunity to tell the story of her exclusion years before. Even then, however, that Divinity School was not open to women for degrees; a few were admitted as auditors, and they were welcome for the Summer Sessions, but women would not be admitted fully to the program until 1956. 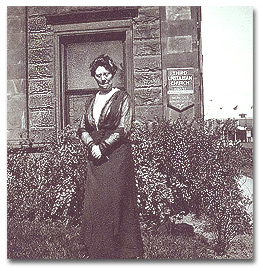 Rowena Morse Mann hoped to be called to serve as minister of either the Second Unitarian or the Third Unitarian Society in Brooklyn, New York. Her correspondence mainly with UUA President Louis C. Cornish led her to be hopeful of consideration, but she was informed that “the chairman of the Supply Committee is opposed to having any woman whatsoever in the pulpit.”

The Biography of Newton Mann