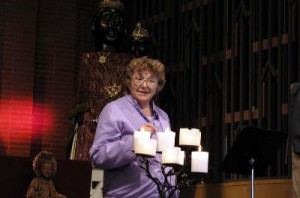 Rosemary Radford Ruether has been a pioneer Christian feminist theologian for over three decades, and among the most widely read feminist theologians in North America. Her book, Sexism and God-Talk, a classic in the field of feminist theology, remains the only systematic feminist treatment of the Christian symbols to date. To categorize her as a feminist theologian, however, is to risk neglecting the broad scope of her interests. With wide-ranging scholarship and a penchant for finding the hidden connections among seemingly disparate fields, Ruether has written and edited close to twenty books and hundreds of articles and reviews. She is seemingly at home in such diverse fields as patristics, the historical and theological roots of anti-Semitism, the Israeli-Palestinian conflict, the history of women in American religion, liberation theology, the mythology of the Ancient Near East, and ecology. Currently she teaches at Garrett-Evangelical Theological Seminary in Evanston, Illinois.

In her mid-twenties, Ruether emerged from academic seclusion to become involved in the civil rights movement of the 1960s, first in Mississippi, then in Washington, D.C. In the summer of 1965, she worked for the Delta Ministry in Mississippi, which opened her eyes to the realities of racism and the struggle for justice in the African American community. This experience was deepened during her first ten years of teaching at the Howard University School of Religion (1966-76), a predominantly African-American seminary in Washington, D.C. There she was exposed to the emerging literature of black liberation theology. During her time in Washington she also became involved with the peace movement, participating in countless marches and demonstrations, often spending time in jail with other radical Catholics and Protestants.

—Courtesy of the Boston Collaborative Encyclopedia of Western Theology

Thirsty for God: A Brief History of Christian Spirituality by Bradley P. Holt.