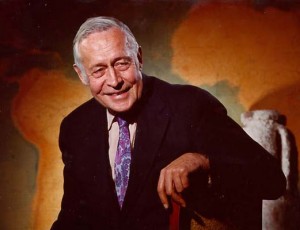 Roger Revelle was a giant of a man, both in his 6-foot, 4-inch stature and in his impact on San Diego, for it was he who was the father of the University of California, San Diego, general campus here. And it is the world-class prestige of UCSD’s faculty that has attracted so many high-technology companies to start, grow and prosper in San Diego.

Dr. Revelle was born in Seattle, grew up in Pasadena, and graduated from Pomona College in 1929 with a BA in geology. He received a Ph.D. in oceanography from UC-Berkeley in 1936, after having joined Scripps Institution of Oceanography in 1931, the same year as his marriage to Ellen V. Clark. Revelle was in the Navy during World War II and head of the Geophysics Branch, Office of Naval Research, from 1946 to 1948.

He then returned to SIO as Professor of Oceanography and became its director from 1950 to 1964. Early on, he conceived that having a general campus of the University of California would improve the quality of SIO’s graduate students—by giving them better training in physics, chemistry and biology—if it were located nearby. From 1954 onward he was engaged in studies and politicking to persuade the UC Regents, the Legislature, and the City of San Diego that UCSD should be built. That watershed decision came in 1959, and the new campus then commenced building. The first General Campus graduate students enrolled in 1960, and the first undergraduate students enrolled in 1964.

Despite what he did in leading the fight to get UCSD’s physical plant financed and built, Revelle’s most meaningful achievement was the recruitment of world-class scientists to come and join its faculty—for their names lured other outstanding people to come. And their prestige attracted money for research grants and superior students to enroll. At one time, UCSD’s faculty had eight Nobel laureates and 50 members of the National Academy of Sciences. Revelle hoped to desegregate the sciences and the humanities and social sciences, because of the profound effect of technology and scientific discovery upon all aspects of modern society.

Though UCSD’s first college is named for him, he never became Chancellor—but that is another story. When the new campus was fairly launched, in 1964 he moved on to Harvard University, where he was Professor of Population Policy and Director of the Center for Population Studies until his retirement in 1976. He then returned to reside in La Jolla until his death in 1991—teaching, doing research and living his belief that science can make a great contribution to the welfare of people everywhere.

Click here for supplemental reading about Roger Revelle on Amazon.