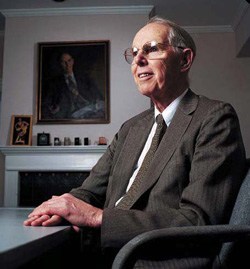 Roger Fisher is Samuel Williston Professor of Law, Emeritus, and Director of the Harvard Negotiation Project. He spent the past 40 years studying, writing, and teaching about negotiation. He developed the concept of interest-based negotiation and has consulted on differences ranging from business disputes to international conflicts.

Roger advised the Iranian and United States governments in their negotiations for the release of the American diplomats being held hostage in Tehran. He helped to design the process used by President Carter in the successful Camp David negotiations between President Sadat of Egypt and Prime Minister Begin of Israel. In South Africa, Roger trained the white Cabinet and the African National Congress Negotiating Committee prior to the constitutional talks that led to the end of apartheid. He advised three of the five Central American countries on a regional peace plan in advance of the Esquipulas II treaty, and he worked with the President of Ecuador on a negotiation process that helped to end a long-standing border dispute between Ecuador and Peru.

Roger continues his active interest in working on issues of this kind. Recently, Roger and colleagues from the non-profit Conflict Management Group tested an HNP technique called “facilitated joint brainstorming” with a high-level but unofficial group from Ecuador and Peru to generate new options that both sides could jointly present to their superiors. The conference led to a peace initiative that ultimately settled a highly contentious border dispute that had persisted for 50 years and resulted in numerous armed conflicts.

Currently, Roger and others are working on ideas that might facilitate progress in managing the complexity of stalled Middle East peace negotiations.

Click here for supplemental reading about Roger Fisher on Amazon.