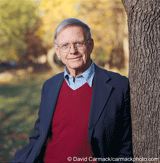 Historian Robert D. Richardson, whose last biography chronicled the intellectual life of American transcendentalist Henry David Thoreau, now tells the remarkable story of one of America’s greatest thinkers, Ralph Waldo Emerson. How do Emerson’s ideas about freedom hold up in our age? Did this 19th-century abolitionist and philosopher embrace the world around him or retreat into the world of ideas?

Richardson is the recipient of the Francis Parkman Prize and the Melcher Book Award for Emerson: The Mind on Fire, “the most readable biography of Emerson ever written,” says Lawrence Buell, Harvard University. In 1832, Emerson resigned his Boston ministry to pursue a career as an essayist, orator and poet, delivering more than 1500 lectures in his lifetime, including “The American Scholar” (1837), and publishing essays such as Nature (1836) and Representative Men (1850). As America’s foremost prophet of individual experience, he was also founder of the Transcendentalist Club, editor of the transcendentalist magazine, The Dial, and spokesman for many reformist causes. Drawing on unpublished personal journals, correspondence and lectures, Richardson charts, in exacting detail, the minutia of Emerson’s daily life in Concord, Mass., and extensive travels; the literature and philosophy he read over several decades; and how his reading shaped his steadily evolving intellect.

—From Publisher’s Weekly and Amazon.com

Click here for supplemental reading about Robert Richardson on Amazon.