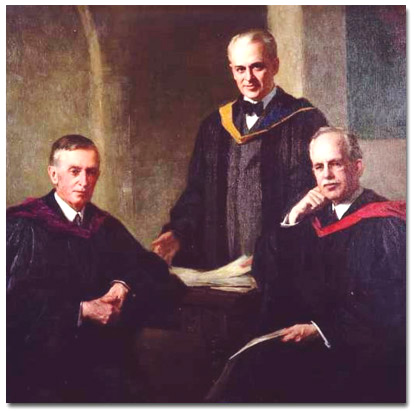 This portrait of Noyes, Millikan, and Hale—Caltech’s Triumvirate—hangs in the dining room of the Institute’s Athenaeum. Courtesy of The Caltech Institute Archives.

Robert A. Millikan was the most famous American scientist of his day. In 1923 he became the second American (A. A. Michelson had been the first, in 1907) to win the Nobel prize in physics. Millikan is best known to physicists for measuring the charge of the electron with his oil-drop experiment; in the span of a remarkably productive career he also made significant contributions to the study of the photoelectric effect, hot-spark spectra and, above all, cosmic rays. He was more than a research scientist; between the wars he headed the new California Institute of Technology, advised industrial corporations and philanthropic foundations and played a key part in the development of Federal policy for academic science.

The son of a Congregational minister and the former dean of women of a small college, Millikan was born in 1868 in Illinois and was raised from the 1870’s in Maquoketa, Iowa (population 3,000). He showed no particular scientific inclinations, and neither his family or school nor the agrarian environment stimulated him to move in a technical direction. At Oberlin College (where his mother had gone before him) he pursued a standard classical curriculum; his move toward physics came when his professor of Greek, impressed with Millikan’s abilities, invited him to teach an introductory physics course in the preparatory school run by the college. (When Millikan protested that he knew nothing about the subject, the professor replied, “Anyone who can do well in my Greek can teach physics.”) After graduation Millikan stayed at Oberlin to teach in the preparatory department for two more years and then went on to Columbia University, where he was the only graduate student in physics. One summer he worked under Michelson at the University of Chicago. Having earned his doctorate in physics at Columbia, Millikan spent a postdoctoral year in Europe, where his teachers included Max Planck, Walther Nernst and Henri Poincare; he acquired what was on the whole a better than average training for an aspiring American physicist at the turn of the century.

Joining the University of Chicago faculty in 1896, Millikan poured his considerable energies into developing the physics curriculum. At that time American students in both high school and college relied on foreign textbooks. Millikan wrote or co-authored a variety of books and laboratory manuals that became classroom standards. (A First Course in Physics, written with Henry G. Gale, sold more than 1.6 million copies between 1906 and 1952.)

World War I interrupted Millikan’s research career. By now one of the nation’s leading physicists, he was increasingly active in the professional affairs of his discipline and in the National Academy of Sciences. He was also a pioneer in developing links between industry and academic physics: he became a consultant to the research department of Western Electric, primarily to advise the company on vacuum-tube problems, and he pointed a number of his students toward careers in industry. Early in 1917, to help mobilize science for defense, Millikan went to Washington as a vice-chairman and the director of research of the newly established National Research Council in the National Academy of Sciences. Like many scientists engaged in defense research during World War I, Millikan soon entered the armed services. As a lieutenant colonel in the Army Signal Corps, he directed work in meteorology, aeronautical instruments and communications, and in his National Research Council capacity, he played an important role in initiating and advancing a major project to develop devices for the detection of submarines.

Millikan’s success in the wartime mobilization was no mean achievement. The National Research Council, a private organization like its parent the National Academy, had no Federal appropriation; it had limited private resources and no authority in governmental affairs. During the war, as a friend recalled, Millikan learned how to “sell science” to a wide variety of people, military and civilian alike.

Millikan’s work in the wartime National Research Council particularly impressed the astrophysicist George Ellery Hale and the physical chemist Arthur A. Noyes, who were inaugurating a venture in education and research in southern California. In 1921, at their urging, Millikan moved to Pasadena to become head of the new and munificently financed Cal Tech and director of its physics laboratory. With a knack for making wealthy southern Californians think it a privilege to be invited to contribute to the institute, he enlarged the Cal Tech endowement and physical plant. Millikan’s traits, fused with Hale’s vision, Noyes’s wisdom and all that money, made Cal Tech virtually an overnight success.

Between the wars Millikan was an influential member of the National Academy and of the National Research Council and its fellowship board, which he helped to administer so as to improve the quality of American physics, particularly in theoretical studies. During World War II he turned over an increasing fraction of his administrative responsibilities at Cal Tech to younger staff members who were running various defense projects. Relinquishing his chief executive’s position to Lee A. DuBridge in 1946, Millikan remained at the institute until his death in 1953. Throughout the Cal Tech years, in spite of his administrative commitments, he taught a course in atomic physics and took a keen interest in graduate students. He also maintained an active research program almost to the end.

Robert A. Millikan served as president of the congregation now known as the Neighborhood Unitarian Universalist Church of Pasadena. He performed one of science’s most beautiful experiments recently described as of comparable worth to Galileo’s experiment on falling objects. Millikan’s memorable oil-drop experiment is described by George Johnson in the New York Times Science section, September 24, 2002.

Dr. Kevles notes Millikan’s salience as a reconciler of science and religion in the 20s, the era of the Scopes trial regarding evolution, stating: “Millikan spoke out strongly for religion, for moral and spiritual values and for a faith tempered by the open-minded tolerance of the scientific spirit.”