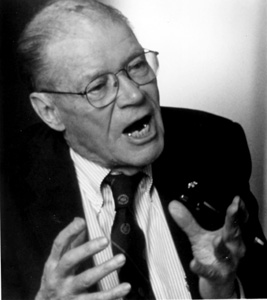 Robert McNamara, the former Secretary of Defense, helped the United States to prevent nuclear war during the Cuban missile crisis. In the May/June 2005 issue of Foreign Policy, he declares:

“It is time—well past time, in my view—for the United States to cease its Cold War-style reliance on nuclear weapons as a foreign-policy tool. At the risk of appearing simplistic and provocative, I would characterize current US nuclear weapons policy as immoral, illegal, militarily unnecessary, and dreadfully dangerous. The risk of an accidental or inadvertent nuclear launch is unacceptably high.

“Today, the United States has deployed approximately 4,500 strategic, offensive nuclear warheads. Russia has roughly 3,800. The strategic forces of Britain, France, and China are considerably smaller, with 200-400 nuclear weapons in each state’s arsenal. The new nuclear states of Pakistan and India have fewer than 100 weapons each. North Korea now claims to have developed nuclear weapons, and US intelligence agencies estimate that Pyongyang has enough fissile material for 2-8 bombs.

“How destructive are these weapons? The average US warhead has a destructive power 20 times that of the Hiroshima bomb. Of the 8,000 active or operational warheads, 2,000 are on hair-trigger alert, ready to be launched on 15 minutes’ warning.

“The whole situation seems so bizarre as to be beyond belief. On any given day, as we go about our business, the president is prepared to make a decision within 20 minutes that could launch one of the most devastating weapons in the world. To declare war requires an act of Congress, but to launch a nuclear holocaust requires 20 minutes’ deliberation by the president and his advisors. But that is what we have lived with for 40 years. With very few changes, this system remains largely intact, including the “football,” the president’s constant companion.

“The destructive power of nuclear weapons is well known, but given the United States’ continued reliance on them, it’s worth remembering the danger they present. A 2000 report by the International Physicians for the Prevention of Nuclear War describes the likely effects of a single 1-megaton weapon—dozens of which are contained in the Russian and US inventories. At ground zero, the explosion creates a crater 300 feet deep and 1,200 feet in diameter. Within one second, the atmosphere itself ignites into a fireball more than a half-mile in diameter. The surface of the fireball radiates nearly three times the light and heat of a comparable area of the surface of the sun, extinguishing in seconds all life below and radiating outward at the speed of light, causing instantaneous severe burns to people within one to three miles. A blast wave of compressed air reaches a distance of three miles in about 12 seconds, flattening factories and commercial buildings. Debris carried by winds of 250 mph inflicts lethal injuries throughout the area. At least 50 percent of people in the area die immediately, prior to any injuries from radiation or the developing firestorm.

“This in a nutshell is what nuclear weapons do: They indiscriminately blast, burn, and irradiate with a speed and finality that are almost incomprehensible. This is exactly what countries like the United States and Russia, with nuclear weapons on hair-trigger alert, continue to threaten every minute of every day in this new 21 st century.

“If the United States continues its current nuclear stance, over time, substantial proliferation of nuclear weapons will almost surely follow. Just last summer, former Secretary of Defense William J. Perry said, “I have never been more fearful of a nuclear detonation that now… There is a greater than 50 percent probability of a nuclear strike on US targets within a decade.” I share his fears.

Click here for supplemental reading about Robert McNamara on Amazon.