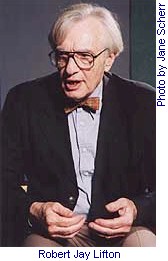 Writer and psychiatrist Robert J. Lifton has authored more than twenty books exploring some of the most significant events of the 20th century: the Holocaust, Hiroshima, Vietnam, the Chinese Cultural Revolution, and terrorism. His works continually examine what it means to be human at moments whe people are aware of the tremendous historical forces that shape them.

Lifton acknowledges that his work attempts to look at individuals in extreme circumstances and to consider them as part of a particular historical crisis, as part of their own peculiar cultural tradition, and as human beings with “universal psycho-biological struggles.”

Specific works include The Nazi Doctors, winner of the Los Angeles Times Book Prize; Death in Life: Survivors of Hiroshima, the winner of a National Book Award; Home From the War: Vietnam Veterans: Neither Executioners Nor Victims; Hiroshima in America: Fifty Years of Denial; and Destroying the World to Save It: Aum Shinrikyo, Apocalyptic Violence, and the New Global Terrorism.