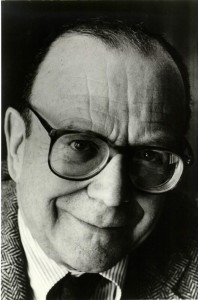 Robert Heilbroner, Norman Thomas Professor of Economics, Emeritus, at the New School for Social research, was born in New York City in 1919, an atom of humanity in a wealthy German Jewish family. His father, Louis Heilbroner, founded Weber and Heilbroner, one of the best-known men’s clothing business of the interwar period. Robert’s secondary education was at Horace Mann School, at that time an adjunct to Columbia University Teachers’ College and a way station toward an Ivy League university education.

Heilbroner went on to Harvard in the fall of 1936: His timing could not have been more propitious. Keynes’s General Theory had just been published that year. The Harvard Economics Department, which was to evolve into the leading center of Keynesian thought by decade’s end, was locked in battle over the book’s message, particularly as it pertained to combating the economic depression then ravaging the country. Heilbroner was initially oblivious to the swirl of controversy, but in his sophomore year, he took a course in which his tutor was Paul Sweezy; at that time a leading young Keynesian and soon to develop into the foremost U.S. Marxist economist of the post-World War II period. The class was learning about the rate of interest as the reward for abstinence. But Sweezy assigned Veblen’s The Theory of the Leisure Class as supplemental reading, and then asked Heilborner, “What do you think Veblen would have thought of abstinence?”
“I still remember a light going on,” Heilbroner says. Sweezy’s engagement with the social dimensions of economics thus provided an analytic underpinning to Heilbroner’s already strong social concerns. But Heilbroner’s full flowering as an economist was to come some years later, after having served in World War II and afterward being briefly in business. Working as a freelance writer in New York in 1946, Heilbroner once again wandered into an economics class that was to shape his life. This time it was Adolph Lowe’s course on the history of economic thought at the New School for Social Research. Heilbroner “fell under the spell” of Professor Lowe.

What Lowe conveyed was the idea of the economic process as a force imposing a powerful order-bestowing shape and impetus to the material activities of society. Classical political economy could thus be seen as a succession of attempts to explicate this process from (roughly) the mid-eighteenth centuries. Of special interest to myself, as a burgeoning student of the history of economic thought, was the way in which the investigation of different periods fastened on, or interpreted, different aspects of society as strategic for its evolution.

The course became the incubator for the initial (1953) edition of Heilbroner’s classic book, The Worldly Philosophers, and thereby the launching pad for Heilbroner’s forty years of unique accomplishment as a professional economist. And Heilbroner really is one of a kind. Despite the numerous professional honors he has received and his status, according to Business Week magazine, as “perhaps the best selling economics author of all time”, Heilbroner has always stood apart from the mainstream of the profession.

The most obvious feature distinguishing Heilbroner from his professional colleagues is his masterful, often magisterial prose. Incomprehensibility is the hallmark of the overwhelming mass of economics writing and is often regarded, in fact, as a measure of the author’s perspicacity. But Heilbroner is not simply a great stylist. The most striking feature of his writing is his ability to lead readers through complex questions of political economy and public policy, bringing them again and again to the point where clarity takes hold. That is why, even beyond the boundaries of the economics profession, Heilbroner is among the great public intellectuals of the post-World War II period.

The Worldly Philosophers: The Lives, Times and Ideas of the Great Economic Thinkers by Robert L. Heilbroner (1999).