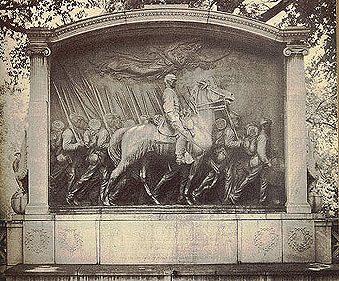 Courtesy of the Massachusetts State House.

The bronze statue, Colonel Robert Gould Shaw and the 54th Regiment Memorial, designed by Augustus St. Gaudens, stands on the Boston Common, across the street from the Massachusetts State House and the Unitarian Universalist Association. It celebrates the first black regiment recruited in the North to fight in the Civil War.

A member of a prominent Unitarian Family, Shaw worked for two years at his uncle’s mercantile firm in Manhattan but felt enslaved by the job. “I don’t want to be a merchant or a doctor or a minister.”

The young man considered his life a failure until, at the outbreak of the Civil War, he distinguished himself as a soldier. Though wounded twice, he loved the military and was assigned to raise and command the first regiment of black troops organized in a Northern state. When the troops were trained he volunteered to lead an assault on Fort Wagner, a Confederate stronghold in Charleston, South Carolina. Shaw was one of the 272 who were killed, wounded, or captured. His body was stripped of its uniform, and he was placed on display in the fort before being thrown in the bottom of a large pit, with the black bodies of his comrades thrown on top of the martyr.