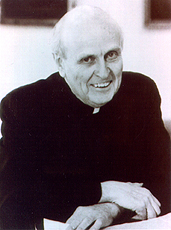 The Rev. Robert F. Drinan was the first Roman Catholic priest to become a voting member of Congress, and the first congressman to call for the impeachment of President Richard M. Nixon.

The career of Father Drinan, a Jesuit, included work as a human rights advocate, as dean of Boston College Law School and as an author of 12 books. But it was in electoral politics, and particularly in his fiery opposition to the Vietnam War, that he gained his greatest visibility.

He maintained that a priest should be involved in secular pursuits as a way of promotion a more just and compassionate society. He was inspired, he once said, by Dorothy Day and the Catholic Worker movement, which she co-founded. And though he never pledged to ignore church dictates while in office, he did ignore Catholic teaching in his support for the federal financing of birth control and abortion.

In 1980, when he was in his fifth two-year term representing his Massachusetts district and planning to run for a sixth, Pope John Paul II ordered him to quit Congress. The Vatican said that it was belatedly enforcing a provision of canon law forbidding priests to hold elective office and that the order applied to all. Father Drinan said he would not even consider resigning from the priesthood to continue a re-election race he was almost certain to win.

He won office on his passionate opposition to the war…and crossed himself before denouncing President Nixon on the House floor as “a fascist war criminal.” The president returned the favor by placing him on the administration’s enemies list.

On July 31, 1973, Father Drinan introduced the first measure to impeach the president, not charging any crimes related to the Watergate scandal, but because of the secret bombing of Cambodia without Congressional approval.