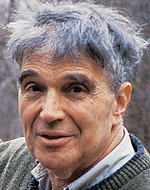 Born in Boston, Robert Coles received an A.B. from Harvard in 1950 and an M.D. from Columbia University’s College of Physicians and Surgeons in 1954. He was a resident in psychiatry at Massachusetts General, McLean and Children’s hospitals. In 1957-58, he became a teaching fellow in psychiatry at the Medical School.

While in the Air Force in 1958-60, Coles worked with children in the South who suffered from the stress of desegregation conflicts. After military service, he joined Harvard’s University Health Services as a research psychiatrist, a post he still holds.

In 1977, the Medical School named him professor of psychiatry and medical humanities. In 1995, he filled a newly established position as Agee Professor of Social Ethics at the School of Education. However, Coles’ courses know no school boundaries; he was taught at Harvard College, the Schools of business, medicine, education, and law, and the Extension School.

“He’s an extraordinary teacher,” says Dean Murphy of the School of Education. He combines a wonderful breadth of knowledge with a tremendous passion for his subject. What strikes you is how deeply committed he is to telling the story of kids who deal with poverty and social injustice. Students find him captivating.”

Coles has written more than 55 books and 1,200 articles and essays. Many of these works are nontechnical and written with great felling for the children he has met. His five volumes of Children of Crisis won the Pulitzer Prize in 1973. Other books explore the meanings of children’s drawings, and how children acquire morals and religious values.

“His writings give voice to the powerful moral, spiritual, and philosophical concerns of children all over the world,” Murphy says.

In a review last year of his latest book, The Moral Intelligence of Children, the noted educator and sociologist Amitai Etzioni referred to Coles as “a national treasure.”